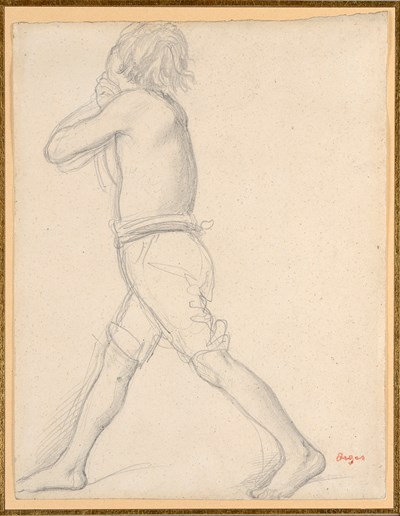 A Striding Youth: Figure Study for The Daughter of Jepthah Sold


On his return from Italy in 1859, Edgar Degas began work on an ambitious, large painting of The Daughter of Jephthah, a subject taken from the Old Testament, which he probably planned to show at the Salon the following year. The artist’s first large history painting, and indeed the largest and most ambitious canvas he was ever to paint, The Daughter of Jephthah was left incomplete in 1861 and remained in Degas’s studio until his death. Sold at the first Degas studio sale in 1918, the painting is today in the collection of the Smith College Museum of Art in Northampton, Massachusetts. As seen from his extensive notes on the composition and development of the painting, as recorded in several of his notebooks, Degas intended The Daughter of Jephthah to incorporate a broad range of particular influences, from the artists of the Italian Renaissance through to Delacroix. There are more preparatory drawings known for The Daughter of Jephthah than for almost any other painting by the artist. These include thirteen compositional drawings, over fifty individual figure studies, six landscape sketches and a number of extensive marginal notes and colour indications in seven of the artist’s notebooks. Several composition studies for the painting are found in Degas’s notebooks, and ‘from the mêlée presented by these composition studies he isolates individual figures and clarifies their poses in the painting – a process that forces him to make final decisions.’ The present sheet would appear to be a study for the youth holding or restraining the horse near the centre of the composition, immediately behind the (partially painted) leaping dog in the foreground. This figure, painted all in a dark blue, is not fully realized in the painting and is therefore difficult to see, but appears to move vigorously to the left, facing the horse, and to lean against its neck and chest in order to restrain it. The pose of the boy in the present sheet, which is hardly legible in the painting, is more clearly evident in a number of Degas’s compositional studies for the painting.A closely comparable drawing of a striding male nude, possibly intended for the same figure in The Daughter of Jephthah, is today in a private collection in Fort Worth, and was sold together with the present sheet and two other studies at the fourth auction of works from the artist’s studio in 1918. A study for what appears to be the same figure also appears in one of Degas’s notebooks.The large number of drawings by Degas that are related to the painting of The Daughter of Jephthah establish the fact that, although the final canvas is unfinished, the artist must have been working on the composition for some time. As Jean Sutherland Boggs has noted of the individual figure studies for The Daughter of Jephthah, such as the present sheet, ‘They show Degas’s increasingly powerful handling of the human body in movement...A quality of haste even emerges from the movement, the hesitancy and the repetitions in the penciled lines.'The present sheet was bought at the fourth vente Degas in 1918 by the Nabis artist Maurice Denis (1870-1943).

A Striding Youth: Figure Study for The Daughter of Jepthah