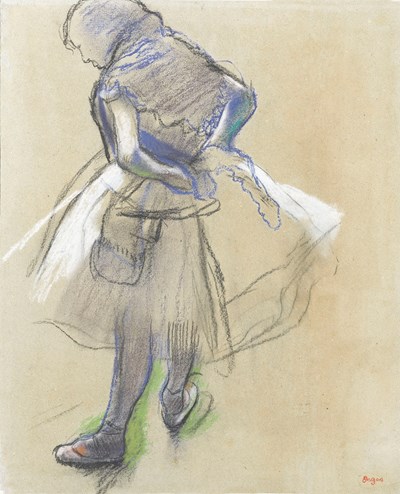 A Standing Dancer, Her Hands Behind her Back Sold


This splendid drawing of a young dancer is related to three small, horizontal paintings by Degas, each depicting dancers in a rehearsal room. The first of these is The Dance Lesson, datable to c.1879 and exhibited at the fifth Impressionist exhibition the following year; the painting is today in the National Gallery of Art in Washington, D.C.. This was followed by a painting of Dancers in the Rehearsal Room with a Double Bass in The Metropolitan Museum of Art in New York, which has been dated to c.1882-1885, and a later, reworked variant entitled Dancers in the Green Room in the collection of the Detroit Institute of Arts. Although this figure appears in all three paintings, the dancer in this drawing is perhaps closest in pose, particularly in the angle of her feet, to the figure in the Detroit canvas, which was begun around 1880 but seems to have been reworked over several years in the 1890’s.All three paintings - in Washington, New York and Detroit - are part of a distinctive group of around twenty rehearsal room scenes with prominently horizontal, frieze-like compositions that were begun in the late 1870’s and continued into the early years of the new century. Degas worked on this series of paintings – each measuring around 40 x 90 centimetres - for more than two decades, and over this period seems to have made a number of drawings of individual dancers, which were used for different variants of the painted compositions. In these horizontal paintings ‘Degas elaborated – in a style gradually evolving from a precise rendering of observed detail to an expressive notation of linear rhythm and suffused color - a fixed set of dancers placed in an oblong rehearsal room, who appear, disappear, or are reproduced in reverse images of themselves in an unending stream of contrapuntal variation.’Interestingly, studies for almost all of the many dancers depicted in this group of frieze-like paintings are known. The present sheet, which may be dated to the early 1880’s, is typical of Degas’ drawings of this period, in which he studied ‘the natural, unguarded gestures of dancers at rest’. The young dancer is here depicted tying the ribbon of her tutu behind her back, standing with her legs turned out and gazing abstractedly downward as she prepares for her class6. Degas often chose to depict dancers in such quiet moments of relaxation or private preparation, and this is especially true of the frieze paintings of the 1880’s. As Jill DeVonyar and Richard Kendall have noted of these works, ‘Apart from the occasional cluster warming at the barre, these new dancers make a virtue of their separateness, absorbing themselves in their individual concerns, facing in a dozen different directions and addressing neither each other nor the artist-visitor.’ The model for this drawing, as well as for several other figures in the same composition, has been tentatively identified as an English dancer named Nelly Franklin, whose name appears on one of Degas’ preparatory studies for the Washington painting of 1879. When the Metropolitan Museum Dancers in the Rehearsal Room with a Double Bass was exhibited in London in 1891, a few years after it was painted, the Irish author and critic George Moore, a friend of the artist, noted of this particular figure that ‘the girl next to [the seated foreground dancer] a little higher up the picture, with light falling on her shoes – she is examining them – occurs in nearly every Leçon de Danse that Degas has painted; she is one of his stock figures, we find her everywhere, by herself and forming part of almost every group.’ While this figure is not quite as ubiquitous in Degas’ work as Moore would suggest, a number of other drawings of this dancer are known. These include a sketchier charcoal study of the whole figure, squared for transfer, in the Hyde Collection in Glen Falls, New York, and a study of her head, looking downwards, in a drawing formerly in the Koenigs collection and now in the Jean Bonna collection in Geneva. Variants of this pose are also found in a handful of other drawings and pastels by Degas, while the same figure appears, in reverse, with a group of other dancers in a finished pastel in the National Gallery of Ireland in Dublin.The importance to Degas of his drawings for the series of horizontal paintings of the 1880’s and 1890’s is underscored by the fact that most of the studies of individual dancers are considerably larger in scale than the respective figures in the paintings themselves, while several of the drawings were brought up to a level of finish to be signed and sold by the artist as independent works in their own right. Gary Tinterow has noted that ‘Unlike the stock figures Degas drew for his ballet pictures of the 1870s, which he used and reused in different contexts over a long period of time, the drawings for the ballet pictures of the 1880s seem to have been made expressly for each new picture, regardless of how often the pose had been used before. These drawings were often done on a relatively large scale before being reduced for inclusion in the meticulously painted canvases. Many of them therefore convey a monumentality often lacking in the final pictures, and also a freedom and certainty of expression rarely matched in the paintings.’

A Standing Dancer, Her Hands Behind her Back