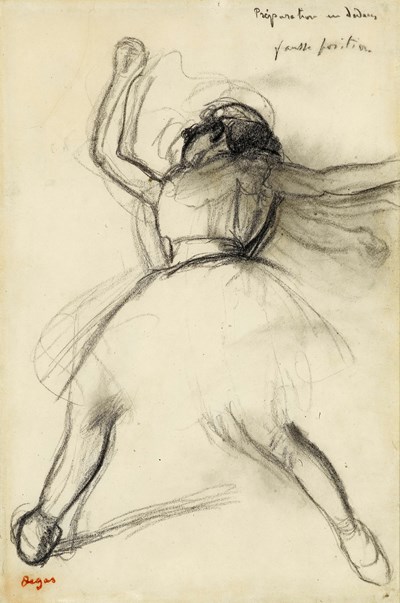 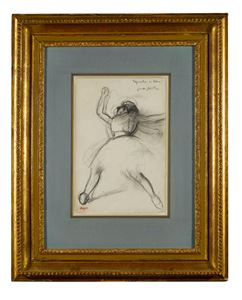 
Over a hundred rapidly drawn life studies of dancers at practice were found in Degas’ studio after his death. These charcoal drawings, of which the present sheet is a fine example, have been dated to the mid 1880’s, and depict various ballet exercises. On his frequent visits to the rehearsal rooms at the Opéra, Degas would have observed the young dancers performing these daily exercises – ronds de jambes, pliés, and so forth – and attempted to capture these standard movements and poses on paper. As a contemporary source recalled of Degas at the Opéra, ‘He comes here in the morning. He watches all the exercises in which the movements are analyzed, and...nothing in the most complicated step escapes his gaze.’ Although Degas is known to have often visited the rehearsal rooms at the Opéra with a sketchbook in hand, and some of these drawings may have been made there, others are equally likely to have been drawn from models posed in the artist’s studio. These drawings do not seem to have been intended as preparatory studies for paintings, since the dancers depicted in them are rarely found in finished works, and instead appear to have been done as ‘training exercises for the artist who, just like his subjects, had to observe and practice his art continually to keep limber.’As Jill DeVonyar and Richard Kendall have noted of ballet lessons in the late 19th century, the young dancers, after completing a series of relatively static exercises at the barre and in the centre of the rehearsal room, would complete their daily exercises with a series of ‘jumps and turns, highly mobile steps that were largely beyond Degas’ rapid observation and formidable recall. He did, however, make a number of superb studies of the movements that preceded and followed these actions’. The present sheet is an example of just such a drawing, with the dancer preparing for a movement known as a rond de jambe à terre, ‘in which one leg describes a semicircle on the floor. “En dedans” specifies that the movement is from front to back...“Préparation” is the movement leading to (preparing for) the “rond de jambe” and it is not normally followed by “en dedans” as Degas writes it; the “en dedans” belongs to the “rond de jambe”’. A comparable drawing by Degas, of a young dancer preparing for an inside pirouette (‘préparation pour un pirouette en dedans’, as the artist has inscribed the sheet), is in the collection of the National Museum in Belgrade. Degas’ charcoal drawings of single dancers engaged in ballet exercises often show signs of pentimenti, as the artist tried to quickly capture the position of a leg or arm in motion, and may be counted among his most immediate and spontaneous drawings6. Many of these drawings, like the present sheet, also have annotations in the artist’s hand. As Lillian Browse has noted, ‘Degas’ technical knowledge obviously went beyond the bounds of superficiality; every single attitude, whether hesitant or assured, is the attitude of a dancer according to her experience; and that he went to some pains to enlarge his knowledge is apparent in the remarks which he has written on some of his drawings, a reminder to him of the different names of the movements, as well as their errors in execution.’Although it has often been assumed that the critical comments often found on these drawings refer to mistakes made by the dancers themselves, it has also been suggested that they may instead point out errors of draughtsmanship, as the artist corrected himself in his attempts to capture a particular pose or movement. The present sheet was one of four charcoal drawings of dancers performing ballet exercises, of identical dimensions and each annotated by the artist, which were sold as one lot in the third Vente Degas in April 191911. Such studies, among the most spirited to the artist’s drawings, have been described as ‘part of Degas’ own dance education, contributing to a personal lexicon of ballet exercises and steps...Like the drawings of casual exercises, these inscribed sheets are doubly significant: they deepen our insight into Degas’ knowledge of classical dance and they provide us with incomparable information about ballet practice in the late nineteenth century.’

Provenance:
The Atelier Degas, Paris, with the atelier stamp (Lugt 657) stamped on the versoThe third Vente Degas, Paris, Galerie Georges Petit, 7-9 April 1919, part of lot 102, sold with three other drawings for 1,450 francsPaul Cassirer, BerlinAcquired by a private collector in the 1920’sThence by descent to a private collection, Germany.