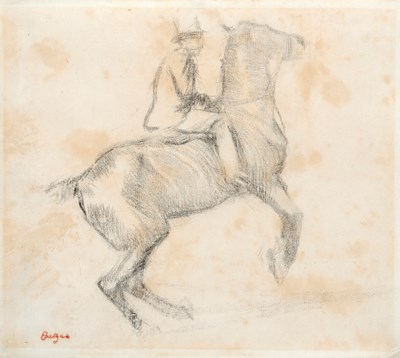 
Although Edgar Degas is highly unlikely to have ever ridden a horse himself, his interest in the theme of horses and their riders lasted for almost the whole of his career. Between 1860 and around 1900, he produced around twenty pastels and forty-five paintings of equestrian themes, as well as seventeen sculptures and some two hundred and fifty drawings of horses, almost all of which remained in his studio until his death in 1917. As Richard Kendall has noted, however, ‘Despite the fame of Degas’s racing pictures and his attachment to the subject for much of his career, almost nothing is known of the circumstances in which he made his equestrian drawings. Apart from some references in his letters and elsewhere to racetrack visits and trips to the country, there is not a single account of him drawing directly from a live horse. Adding to the mystery is the huge technical and conceptual challenge of fixing the position of an animal in rapid movement, especially one in such unstable, unpredictable action...Degas apparently created these works from vivid recollections of the turf and the stable and a limited number of on-the-spot sketches, all reinforced by knowledge gleaned from other sources.’ In fact, many of Degas’s drawings and sculptures of horses evince the artist’s particularly close study of the pioneering stop-motion photographs of Eadweard Muybridge who, from around 1872 onwards, had begun photographing horses in motion; these were first widely published, under the title Animal Locomotion, in 1887. Degas is known to have made several drawings and pastels after individual photographs from Muybridge’s Animal Locomotion, and these drawings he often counterproofed so as to be able to record the horse’s position from both sides. The pose of both horse and rider in the present sheet is close to, and may have been inspired by, a number of individual frames in several sequences of photographs by Muybridge of a bay horse named Daisy jumping a hurdle, as well as one or two photographs of unmounted horses rearing. As Aaron Scharf has noted of Degas’s drawings after Muybridge’s photographs, ‘Whereas painters like Meissonier, Detaille and Morot (all of whom had subscribed to Animal Locomotion) made use of the more dramatic positions of horses in the photographs, Degas seems to have preferred (as he did with his dancers) those positions in which a more subtle implication of movement is suggested and which, in the light of pictorial convention, appeared the least natural.’ Degas’s study of Muybridge’s photographs of horses also had an impact on his first bronze sculptures of horses in motion, and indeed the pose of the horse in this drawing is close to that of a bronze of a Rearing Horse (Cheval se cabrant). The present sheet provides an insight into Degas’s working process, as an example of his practice of transferring one charcoal drawing onto another sheet to see the image in reverse. This was often done in the case of drawings of equestrian subjects; another example of a transfer drawing of this subject is in the Art Institute of Chicago. As has been noted of such counterproofed drawings by Degas, ‘It shows how determined he was to recreate real life in the studio, not, like the Impressionists, to catch real life on the move.’ Furthermore, as Christopher Lloyd has written of these drawings of horses, jockeys and riders, ‘they provided Degas with a portfolio of images that could be referred to or reworked over an extensive period of time. The rhythmic actions associated with riding are captured by flurries of lines and frequently redrawn outlines.’A comparable charcoal drawing of three horses with riders is in the collection of Marlene and Spencer Hayes of Nashville and New York.