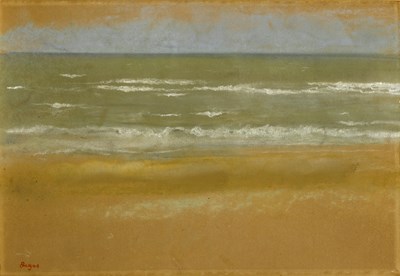 
This is part of a series of more than forty pastel studies of landscapes and seascapes, probably done en plein air, which were drawn by Degas on the Channel coast in the summer and autumn of 1869. Degas spent much of the summer of 1869 at the village of Beuzeval, near Houlgate and Villers-sur-Mer on the Normandy coast. He spent his time making pastel landscape drawings along the small stretch of coastline between Villers, Houlgate and Dives-sur-Mer to the southwest. In these works, Degas may have been inspired by the early seascapes of his friend James Whistler, as well as the pastel landscapes of Eugène Delacroix, whose work he avidly collected. Paul-André Lemoisne, the author of the seminal catalogue raisonné of the artist’s works, noted of these Normandy scenes that ‘As he looks at them, Degas’s keen eye also registers the appearance of the countryside, the pale sea-green shore fringed with foam, the curve of a bank of golden sand, the outline of hills, a velvety meadow, the color of the sky. Later, back in the studio, the artist delights in recreating some of these places from memory, attempting to reproduce the colors and outlines with his sticks of pastel.’ More recently, Christopher Lloyd has noted of these pastel landscapes that, ‘Degas concentrates on different times of day, changing atmospheric effects and varied meteorological conditions – sunlight, dampness, light breezes and sudden gusts of wind. The handling of the pastel is amazingly adroit – smoothly applied with delicate nuances in some areas and roughly treated in others. Above all, there is an eloquent sense of space and an aching feeling of emptiness.’Although until recently regarded by scholars as having been done in Degas’s Paris studio, Richard Kendall has convincingly argued that a number of these 1869 pastels are topographically accurate and depict actual sites on the Normandy coast, and that most – if not all – of these works must have been done on the spot. A note in one of Degas’s notebooks of this period underlines the artist’s close observation of his surroundings: ‘Villers-sur-Mer, sunset, cold and dull orange-pink, whitish green, neutral, sea like a sardine’s back and clearer than the sky…Line of the seashore brown, the first pools of water reflecting the orange, the second reflecting the upper sky; in front, coffee-coloured sand, rather sombre.’ As Jean Sutherland Boggs has noted of the 1869 pastels, ‘In these works, Degas used pastel to capture an effect that was illusive and transitory.’With the artist looking out to sea, the precise location of this pastel cannot be determined, as is the case with almost half of the forty-odd pastels drawn in 1869. A recent description of a similar seascape from the same series, today in the Musée d’Orsay, may equally be applied to the present sheet: ‘in this seascape Degas worked with pastel lightly and openly...Using the warmth of the paper as an additional color that gives body to the sea in the foreground and suggests the inevitability of sand under our feet, he seems to have limited himself to four sticks of pastel: a white, a black, a blue, and a blue green. The buff visible through the strokes of blue green in the sea make it appear greener still. On the other hand, the blue in patches of the sky is intense...But the greatest subtlety is his emphasis on the horizon...’ Among other comparable beach scenes from this 1869 group of pastels is a Seascape, with Beach at Low Tide in the collection of the Albertina in Vienna.As Kendall has written of such works as this, ‘it is notable that almost all the seascapes and beach scenes are depicted under cloudy, overcast skies. None of them, however, is generalized, and each proposes a subtle variation on the theme of sea-mist, sun-lit haze or impending rain. Seen in this way, the pastels are as much a part of Degas’ documentary project as his land-based motifs, and even at their most vaporous must be seen as particularized accounts of local circumstances, rather than the efflorescences of a city-dweller’s mind.’