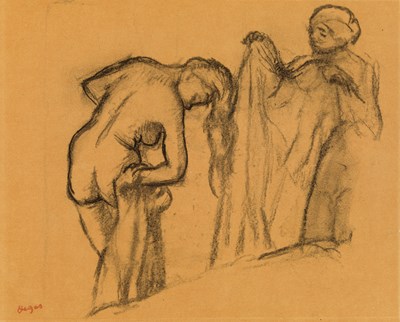 
Much of Edgar Degas’s late work - from around 1885 until he stopped working in 1912 – was devoted to a series of paintings, drawings, pastels and lithographs of the female nude. In the catalogue of the eighth and final Impressionist exhibition of 1886, a large group among the works shown by Degas were described simply as ‘Suite de nus de femmes se baignant, se lavant, se séchant, s’essuyant, se peignant ou se faisant peigner.’This drawing can be related to a series of six lithographs of nude women after a bath, executed by Degas in the early 1890’s. In a letter to his old friend, the painter Évariste de Valernes, dated the 6th of July 1891, Degas refers to these prints, writing that ‘I am hoping to do a set of lithographs, a first series of nude women at their toilette, and a second on nude dancers.’ Degas had often been attracted to the motif of a woman stepping out of a bathtub and drying her hip while her long hair hangs down in front of her, and produced several paintings, drawings and pastels on this theme. The suite of lithographs of 1891-1892 have been described by one scholar as ‘Degas’s last great enterprise as a print-maker…technically immensely audacious and complex’, while another has noted that ‘In the series, Degas displayed his mastery of the lithographic medium, which he used not only to produce diverse visual effects but also to integrate a single figure into variously composed pictorial contexts.’ Two of the lithographs show the nude bather facing left, while the other four depict her facing right. Similarly, in four of the prints the nude is depicted alone, but in the other two she is faced by a maid holding out a towel or robe. As Ronald Pickvance has described this series of prints, ‘The bathers form a coherent sequence, each a subtle variation on a set pose: a figure seen from the back, her body arched, her long hair hanging loosely as she dries her hip. They rely on the familiar interplay of reversal and subterfuge: an altered format, an elegant upright against a squat horizontal; of variations in staffage, with or without a chaise longue and mirror, with or without a maid who patiently holds a towel as she waits for her mistress to finish drying herself.6The present sheet is a preparatory study for the first state of After the Bath III (Après le bain III), one of the lithographs of a bather accompanied by her maid. In the first state of the print, Degas included the figure of the maid about to wrap her mistress in a towel, as in this drawing. In the second state of the print, however, he removed most of the narrative detail, erasing the maid entirely, as well as the back of the chaise longue and much of the background, to focus solely on the bather. It was this second and final state that was published in an edition of around twelve impressions, of which about half were signed by the artist.Around two dozen drawings by Degas which may be related to this important suite of lithographs are known, including examples related to the present sheet in the British Museum in London, the Burrell Collection in Glasgow and the Metropolitan Museum of Art in New York. The present sheet has been in a German private collection since the 1930s, and until recently had only been known from an old photograph in the catalogue of the third vente Degas of 1919.Like many of the charcoal drawings of the artist’s late career, the present sheet is drawn on thin papier calque, or tracing paper. As George Shackelford has noted, ‘In the 1890s…Degas turned to a new shortcut for transferring a successful idea from one surface to another. For this purpose, he used tracing paper – papier calque – through which he could see a drawing below. The smooth, uniform surface of the hard-milled paper provided an unusual but ideal foil for the charcoal sticks that he favored as drawing tools, allowing him both to obtain very smooth, continuous lines unbroken by the tooth of rougher papers and also to smudge and wipe the charcoal, or even to erase it, to create shadow or to correct a misplaced contour. Such tracings could stand on their own as independent sheets are were sometimes signed and sold by Degas, but the vast majority of them remained in the studio, to be discovered at the time of his death.’Degas’s bather lithographs of 1891-1892 were to be his final achievements as a printmaker. As Douglas Druick and Peter Zegers have noted, ‘Degas brought to lithography a technical inventiveness that had not seen its equal...the lithographs reveal Degas’s willingness to explore to the limit a variety of technical possibilities...Yet these lithographs of 1891-92 mark the end of Degas’s career as a printmaker. Just as the lithography revival was hitting its stride, and the medium attracting ever more artists, young and old, Degas turned his back on it.’This drawing was acquired in Paris in the 1930’s by the German artist Karl Arnold (1883-1953), one of the leading illustrators active in the first half of the 20th century in Germany.