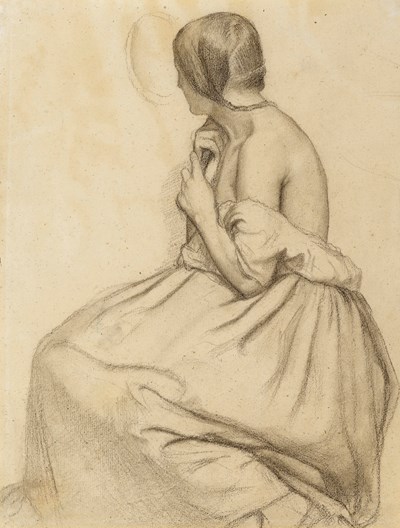 A Seated Young Woman Plaiting her Hair, Seen from Behind and Looking into a Mirror Sold


This beautiful drawing, which does not seem to be a study for any known painting, may be tentatively dated to Degas’s period of study at Academie de France in Rome between 1857 and 1860, or perhaps a few years thereafter. In the pose of the figure, Degas may here be seen to be reflecting on the example of his great hero Jean-Auguste-Dominique Ingres (1780-1867), and in particular the latter’s famous Valpinçon Bather of 1808 in the Louvre, of which the younger artist produced a faithful copy in pencil in one of his sketchbooks, datable to around 1855, now in the Bibliothèque Nationale de France in Paris. In the present sheet, as in Ingres’s painting, the model is turned away from the viewer. As Anne Roquebert has noted, ‘Degas was obsessed with the body observed in private, when the person is not conscious of being seen; moreover, when the face is turned away, attention is not diverted from the essential, which for Degas was the body, not the face. The principal issue here becomes how to express the emphatic contours of the pose with only the scope and simplicity of line.’The influence of Ingres is also seen in Degas’s handling of the pencil medium, with a fine hatching that creates a sense of volume in the drapery. Among comparable drawings by Degas is a study of a Young Woman Half Nude Resting on her Elbow in the Musée d’Orsay. In such academic studies as these, ‘the artist offers a variety of forms for different types of nude models...line drawings focusing on the outline and shaded drawings that use fine hatching to give this graphic art a more pictorial, expressive effect. From supple, athletic silhouettes to meticulously finished drawings with fine, faint lines – veritable working drawings – Degas this built up a formal vocabulary to use as he liked.’ Echoes of this figure may also be found in the pose of a seated woman in a chemise, with a bared shoulder and turned away from the viewer, in his enigmatic painting Interior (sometimes called The Rape) of c.1868-1869 in the Philadelphia Museum of Art. This drawing does not figure in any of the four sales of the contents of Degas’ studio held after his death. A fifth and final sale was originally planned, but instead the remaining paintings, drawings, pastels and etchings in the Degas’s studio were divided among the artist’s heirs; some - including the present sheet - to his younger brother René, and the rest to the artist’s nephews and nieces. The present sheet remained in the possession of Degas’s descendants for nearly eighty years after his death. Inherited by the artist’s brother Jean-Baptiste René de Gas (1845-1921), the drawing passed to his daughter Odette de Gas (1887-1932), who married Roland Nepveu (1885-1962). The drawing thence passed to their daughter, Arlette Nepveu-Degas, from whose collection it was sold at auction in Paris in 1994.

A Seated Young Woman Plaiting her Hair, Seen from Behind and Looking into a Mirror