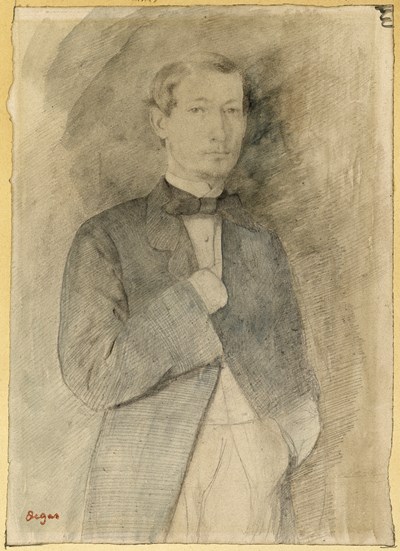 
This superb drawing is a portrait of one of Degas’s Neapolitan cousins, Adelchi Carlo Diodato Morbilli (1837-1913). The sitter, who would have been about nineteen or twenty years old when this drawing was made, was the youngest son of Degas’ aunt Rosa and Giuseppe Morbilli, Duca di Sant’Angelo e Frosolone. The present sheet was probably drawn during one of Degas’s two stays in Naples while on his first trip to Italy, either between July and October 1856 or between August and October 1857. The youngest of Degas’s Morbilli cousins, Adelchi married Enrichetta Bossini in 1877, and eventually became the director of the Banca Nazionale in Naples.In style, technique and composition, this drawing displays the influence on the young Degas of the draughtsmanship of Jean-Auguste-Dominique Ingres, an artist of particular importance to him at the onset of his career. As one scholar has noted of the artist’s portrait drawings of this first Italian period, ‘The increasing influence of Ingres on Degas’ portraiture may have been stimulated by his environment. Perhaps, although removed from the actual works themselves, he recalled them when he found himself, like Ingres in his earlier years, in Italy. In a drawing of his uncle Edouard De Gas, which he dated October 1857, the proud bearing of M. De Gas and the refined and restrained draftsmanship are superficially like the pencil portraits Ingres had made in Italy to eke out a livelihood. This is also true of the drawings of his cousins Alfredo and Adelchi Morbilli. These Ingresque pencil portraits must have been a satisfactory way for Degas to record his relatives’ features.’Two other finished portrait drawings of Adelchi Morbilli by Degas are known. A pair of pencil drawings of Morbilli in a seated pose were included in the third vente Degas of April 1919. One of these is today in the collection of Jean Bonna in Geneva and the other, which is slightly more refined in execution, is in a private collection in New York. In both drawings Adelchi Morbilli is depicted in a relaxed, informal pose, with his left leg crossed over his right and his right hand holding a cane, while in the present sheet he is shown more formally and standing. The affection Degas must have felt for his cousin, who was three years younger than the artist, is manifest in these three sympathetic portrait drawings.Writing of Degas’ drawings of the Morbilli brothers, including the present sheet, Robert Gordon and Andrew Forge have noted that ‘Based on the model of the portrait drawings of Ingres, these by Degas have features that are already distinctively his own: the crisp, cutting line, the assertive directions, an extreme refinement in the relation of details to the whole. He is sharply aware of the shapes that clothing makes, of how a cuff sticks out from a sleeve or how a coat collar encircles the neck. The head, the point and purpose of the drawing, is realized with an intense regard that embraces the fall of the hair or the location of the rather large ear as well as the characteristic proportions of the features. These are brilliant drawings in which signs of brilliance are suppressed. The hatching that serves both to model the form and to color it is restrained, slowed down, formalized. Notice the controlled patterning of parallel lines that make the sleeves and cuff in the watercolor drawing, and also the wall behind the sitter.’Degas only rarely parted with the portrait drawings and paintings he made of his family and relatives, and the present sheet remained in his studio until his death. The drawing was included in the fourth vente Degas, held in Paris in July 1919, where it was framed together with a standing portrait of Adelchi’s brother Alfredo and one of their mother, Rosa Adelaida Morbilli, which is in the same technique of pencil and wash as the present sheet.