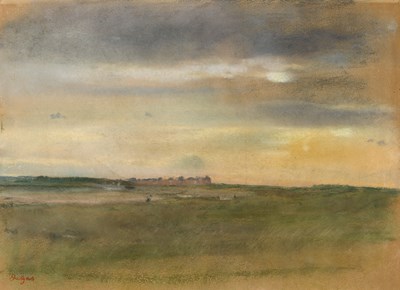 Coastal Landscape at Sunset, with a View of Cabourg (Paysage, soleil couchant)


This is one of only a handful of drawings from the series of Degas’ pastel landscapes of 1869 to be signed and dated by the artist. Richard Kendall has convincingly suggested that this pastel depicts a view taken from just southwest of Houlgate in Normandy, looking across to the resort town of Cabourg in the distance. The Normandy landscapes of 1869 represent Degas’s first consistent use of pastel, which by the 1880’s was to become his preferred medium. He seems to have found the medium to be an ideal means of capturing transient effects of light and atmosphere in a landscape, something he had not always been able to achieve before. As Kendall writes, ‘In the late 1850s, Degas had struggled with pencil, ink and watercolour to translate his perceptions into two-dimensional imagery, adding vividly written summaries of changing light and weather conditions. Now, he could use the medium of pastel, combining the effects of colour, line and tone in a single process that almost kept pace with his perceptions. With pastel, he could scatter powdery hues across the paper to indicate coffee-coloured sand or silvery-green sea…With pastel, too, he could respond to the finest nuances of the atmosphere, working rapidly as wind and weather began to change.’ In works such as this and the previous sheet, Degas applied the pastel lightly over the warm tones of the pale brown paper, which he left to show through in places, thus adding to the atmospheric qualities of the scene. At the fourth vente Degas of July 1919, at which all of the 1869 pastel landscapes were sold, each fetched very high prices that were often several times the estimates. As the expert Joseph Durand-Ruel noted in a letter written the day after the auction, ‘We had the greatest success with the small pastels of landscapes, which we had appraised at around 1,000 francs each because of the current overpricing of Degas’s works and which, to our great surprise, sold for between 3,000 and 20,000 francs. These prices are sheer folly.’This pastel landscape was one of several works acquired at the ventes Degas by the Parisian amateur Charles Comiot. Apart from the present sheet, Comiot owned at least five other pastel landscapes by Degas from the series done around 1869. In an article on the Comiot collection, published in 1927, the art critic François Fosca devoted considerable attention to this group. As he wrote of the landscape pastels in the collection, ‘They are numerous, because M. Comiot was able to recognize that in this field Degas was no less a master than in the representation of the human body…most were executed by the seashore, and show us flat, deserted beaches, dunes with grasses grey and sparse. From such bare sites, so much lacking in plastic elements, Degas brings forth wonders: isn’t that the mark of a great artist?’ Fosca added that ‘These pastels are quite a bit closer to those of Whistler. Just as the painter of the Nocturnes, Degas withdrew from nature as soon as the sun appeared at its brightest. An ochre-tinted beach and the stifling blue of the sky when the mist covers the sun; Degas, like Whistler, asked for nothing else.’This pastel landscape, recently aptly described by Theodore Reff as a ‘wonderfully atmospheric, moody landscape’7, later entered the collection of the French painter Gustave Loiseau (1865-1935), and remained in the collection of his heirs until the 1970’s.This group of small pastel landscapes from the summer and autumn of 1869, characterized by a sense of emptiness and an absence of human figures, were never exhibited in Degas’s lifetime and remained in his studio until his death. Even today, they remain relatively obscure within the context of the artist’s oeuvre. The fact that some of these pastel landscapes are both signed and dated 1869 would suggest that the artist may well have regarded them - despite their relatively small proportions and austere compositions – as finished, independent works. As Richard Kendall has noted of these works, ‘Never exhibited as a group and still generally unknown, these pastels can be counted among the seminal achievements of [Degas’] pre-Impressionist years.’

Coastal Landscape at Sunset, with a View of Cabourg (Paysage, soleil couchant)