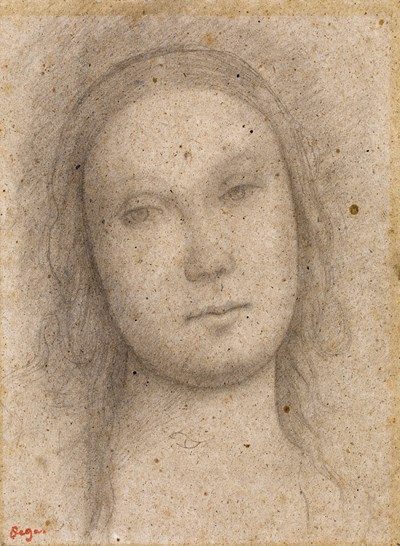 The Head of the Virgin, after Perugino Sold


Edgar Degas spent much of the early years of his career engaged in a serious study of Renaissance art, resulting in a significant number of drawn and painted copies by the artist. He first registered as a copyist at the Louvre in April 1853, and soon began making drawings after Old Master paintings in the museum’s collection, with a particular emphasis on Italian art of the 15th and early 16th centuries. Degas maintained the practice during his three-year stay in Italy between 1856 and 1859, drawing numerous copies after works in Florence, Rome and Naples; a task in which he was also encouraged by his father. In a letter of January 1859, written to his son in Florence, Auguste De Gas advised the young artist that ‘the masters of the fifteenth century are the only true guides; once they have thoroughly made their mark and inspired a painter unceasingly to perfect his study of nature, results are assured.’ On his return to Paris, Degas carried on copying works of art in the Louvre, and in fact continued to register as a copyist in the museum until 1862. Among the Quattrocento and Cinquecento paintings copied by the young Degas were works by Fra Angelico, Paolo Uccello, Filippino Lippi, Mantegna, Lorenzo di Credi, Vittore Carpaccio, Botticelli, Luca Signorelli, Leonardo, Michelangelo, Mantegna, Giovanni Bellini, Perugino, Raphael, Giorgione, Titian and many others. As the artist himself said, ‘One must copy and recopy the masters, and only after having given every proof of being a good copyist can one reasonably be expected to paint a radish from nature.’ Most of the drawn and painted copies by Degas may be dated to the formative years of the artist’s career, between 1858 and 1861, and several of the motifs and figures he copied were later integrated into his own paintings. As Theodore Reff has noted, ‘The interest in older art…was indeed so extensive in Degas’s early career, and at the same time so pervasive an influence on his own art, that his activity throughout the 1850’s may be described as essentially that of a copyist’, while another scholar has written that ‘Through copying Degas acquired at a very early stage that sureness and maturity which always astonished critics.’ In many of these early drawings Degas used a soft pencil and a coarse, flocked greyish paper, as in the present sheet.This recently rediscovered drawing is a copy after the head of the Virgin in a panel painting of The Virgin and Child with Saints John the Baptist and Catherine of Alexandria by the Umbrian artist Pietro Perugino (c.1450-1523) in the Louvre. Painted around 1493, at the height of the Perugino’s career, this small devotional picture was acquired by the Musée du Louvre in 1821.The present sheet is typical of Degas’ copies after Renaissance masters, and his own particular interest in individual studies of heads and figures, isolated from a more crowded composition. As one scholar has noted of Degas, ‘In loose drawings, and more rarely in oils, he recorded memorable portraits as he encountered them…Sometimes he singled out individual heads in altarpieces or frescos and treated them as portraits…His liking for the precision, for the unadorned purity of early portraits persisted for decades.’ Degas copied several other paintings by Perugino, including figures from an Ascension of Christ in the Musée des Beaux-Arts in Lyon, in a sketchbook now in the collection of the in the Bibliothèque Nationale in Paris. It was perhaps thinking of such paintings as those by Perugino that Degas is said to have once remarked: ‘So there is no bias in art? What about the Italian Primitives, who express the softness of lips by imitating them with hard lines, and make eyes come to life by cutting off the eyelids as if with a pair of scissors?’

The Head of the Virgin, after Perugino