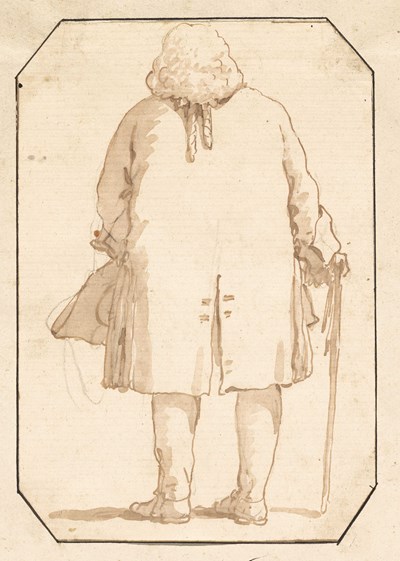 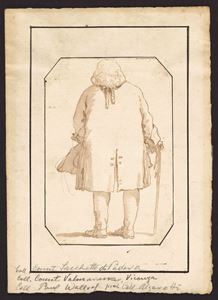 A Caricature of a Man seen from Behind, with a Cane and Holding a Tricorne Hat Sold

Pen and brown ink and brown wash, over traces of an underdrawing in black chalk.
The corners of the sheet cut.
Inscribed Coll. Count Sacchetto di Padova/ Coll. Count Valmarana, Vicenza/ Coll. Paul Wallraf. prob. Coll. Algarotti at the bottom of the old album page on which this drawing is mounted.
156 x 107 mm. (6 1/8 x 4 1/4 in.)


It is thought that caricature drawings by Giambattista Tiepolo once made up at least three or four albums. Two such albums, containing ‘una copiosa collezione di disegni umoristici del Tiepolo’ (‘an ample collection of humorous drawings by Tiepolo’), are recorded in the collection of Count Bernardino Corniani degli Algarotti in Venice in 18541. A further album of 106 caricature drawings, entitled Tomo terzo di caricature (‘Third volume of caricatures’) and possibly also from the Algarotti-Corniani collection, was acquired by the bookseller John Grant at auction in Edinburgh in 1925 and sold by him to the collector Arthur Kay; this album seems to have remained intact until it was broken up and sold at auction in London in 1943. Assuming that there was a Tomo primo and a Tomo secondo (quite possibly the two albums recorded in the Algarotti-Corniani collection in 1854), and a roughly equal number of drawings in all three albums, it may be determined that there must have been at least three hundred of these caricatures, and perhaps even as many as between four and six hundred in total. Around two hundred examples survive today, most of which are by Giambattista Tiepolo. They must have remained in the family studio after the elder Tiepolo’s death, since several were adapted by Domenico Tiepolo for figures in his late series drawings of the 1790s, notably the so-called ‘Scenes from Contemporary Life’ and the Punchinello series. Apart from the drawings known to have come from the Tomo terzo di caricaturealbum and a group of some twenty caricatures in the Museo Civico Sartorio in Trieste, almost every other known Tiepolo caricature drawing has cut corners, which again suggests that they were once pasted into albums.

This drawing may be presumed to have originated in the collection of the Conti Valmarana of Vicenza, which seems to have included a large number of Tiepolo caricatures. (It should be noted that both Giambattista and Domenico Tiepolo worked at the Valmarana family villa in Vicenza in 1757.) The caricature drawings associated with the Valmarana collection are, for the most part, depictions of single figures, with most seen from behind, and all have cut corners. Thirty-two of the caricatures from the Valmarana collection were acquired at an unknown date before 1959 by the dealer and collector Paul Wallraf (1897-1981)3, and of these, fifteen examples are today in the Robert Lehman Collection at the Metropolitan Museum of Art in New York.

Giambattista Tiepolo’s caricatures seem to have been done for his own amusement, and also – albeit perhaps incidentally - as a source of figural types for his sons. These delightful drawings, in the words of one scholar, ‘call for no elaborate explanations – they are so simple and direct they speak for themselves. I do not fancy that they served any directly useful purpose or that they were ever intended as notes or sketches for larger or more important undertakings...They are the fruit of the artist’s leisure hours, the work of a man for whom the act of drawing was always the source of the keenest of pleasures...they are the work of a man who was the most gifted artist of his generation and are the outcome of that same calligraphic skill and acute observation that contributed so largely to the success of his major achievements.’

In these charming works, Tiepolo may have been inspired by the caricature pen drawings of 17th century artists such as Annibale Carracci, Pier Francesco Mola and Guercino, while older contemporaries such as Pier Leone Ghezzi in Rome and Marco Ricci and Anton Maria Zanetti in Venice also produced caricature drawings. However, Tiepolo tended not to introduce into his drawings the unsympathetic and often malicious inferences typical of the caricatures of these earlier artists.

As one scholar has noted, ‘Often a Tiepolo caricature will evoke a kindly smile; at other times, compassion or curiosity. Whatever the response, however, the artist’s most poignant images are to be found among his caricatures. The compromise between style, license, and observation which they represent opened caricature fleetingly to a new expressiveness, a glimpse of a loftier mode of feeling.’

A Caricature of a Man seen from Behind, with a Cane and Holding a Tricorne Hat