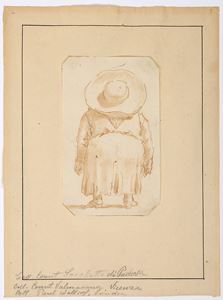 A Caricature of a Short Man seen from Behind, Wearing a Large Hat Sold

Pen and brown ink and brown wash, over traces of an underdrawing in black chalk. The corners of the sheet cut. Inscribed Coll. Count Sacchetto di Padova / Coll. Count Valmarana, Vicenza / Coll. Paul Wallraf, London in pencil at the bottom of the album page on which this drawing was mounted.141 x 88 mm. (5 1/2 x 3 1/2 in.)


Giambattista Tiepolo’s caricature drawings have generally been dated to his last Venetian period, between his return from Germany in 1753 and his departure for Spain in 1762. As has been noted by one recent scholar, ‘By the time Giambattista turned to caricature, he was in his fifties and well established, with two grown sons following in his creative footsteps...These drawings expressed his lighter side, describing, in an economical yet convincing manner, the quirkier and funnier aspects of the men who crossed his path day by day. Over time, Giambattista produced a fascinating sampling of society, from noblemen, priests, and senators, to merchants, dockworkers, cooks, and artisans...Caught unawares, these men were reduced to their essentials, summarized most effectively through swift and insightful strokes of the pen...[They are] a brilliant blend of observation, memory, and distillation.’In many of these caricatures the subject is seen from behind; indeed, this is a particular characteristic of caricature drawings by both Giambattista and Domenico Tiepolo. As another scholar has recently written of this type of lively caricature, ‘Tiepolo did not represent specific people but rendered generalized types that must have been immediately recognizable to contemporaries. Their gestures are minimal, the details of their clothes are understated, and indications of setting are scant. Here, even their faces are not shown, yet enough is communicated by their physiques, shoulders, stances, and costumes to distinguish types.’Several of Giambattista Tiepolo’s caricature drawings were later reused by his son Domenico in his own drawn compositions of the 1790s, notably in the series of finished drawings known as the ‘Scenes from Contemporary Life’. Indeed, an almost identical figure, albeit dressed as a woman, appears as an onlooker in Domenico’s drawing of The Donkey Stable, signed and dated 1791, in the Muzeum Narodowe in Szczecin, Poland.

A Caricature of a Short Man seen from Behind, Wearing a Large Hat