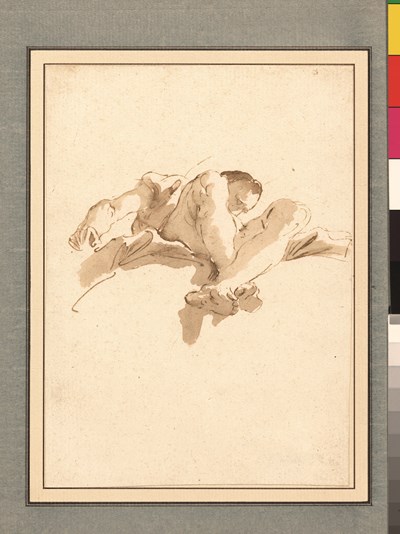 A Study for a Ceiling: A Seated Figure on a Cloud Sold


The 19th century Swiss art historian Jacob Burckhardt (1818-1897) aptly noted of the paintings of Giambattista Tiepolo that the artist ‘carries his foreshortening from below further than any, so that the soles of the feet and nostrils are the characteristic parts of his figures.’ A large number of similarly foreshortened figures - many of whom are seen mainly as pairs of legs – appear, for example, throughout Tiepolo’s vast fresco of Apollo and the Continents, painted between 1752 and 1753 on the vault above the staircase of the Residenz at Würzburg. The same novel approach to viewpoint and perspective is also evident in many of Tiepolo’s spirited drawings for ceiling figures, of which the present sheet is a fine example. As has been noted of the drawings from the Sole figure per soffiti albums, ‘These sheets depict individual foreshortened figures - ethereal young women, heroic nudes, and warriors – as well as figures that are so sharply foreshortened that only their knees, parts of their heads, and perhaps one or both of their arms can be seen.’ The confidence and ingenuity evident in the composition of a drawing such as the present sheet is a feature of Tiepolo’s draughtsmanship that has long been esteemed. As Marjorie Cohn has written, ‘No student of Tiepolo drawings remains indifferent to their sheer virtuosity. Giambattista, in his wash drawings above all, achieved a new abstraction of illusionism through physical means that were direct, immaculate, and apparently effortless.’ Comparable studies of figures seen from below, characterized by a particular emphasis on the dangling legs of a seated figure, include drawings in the collections of the Albertina in Vienna, the Museo Civico Sartorio in Trieste, the Fitzwilliam Museum in Cambridge, the Musée des Beaux-Arts in Rouen, the Kupferstichkabinett in Berlin, the Museum Boijmans van Beuningen in Rotterdam and the Graphische Sammlung of the Staatsgalerie in Stuttgart, as well as several drawings in the Princeton University Art Museum.

A Study for a Ceiling: A Seated Figure on a Cloud