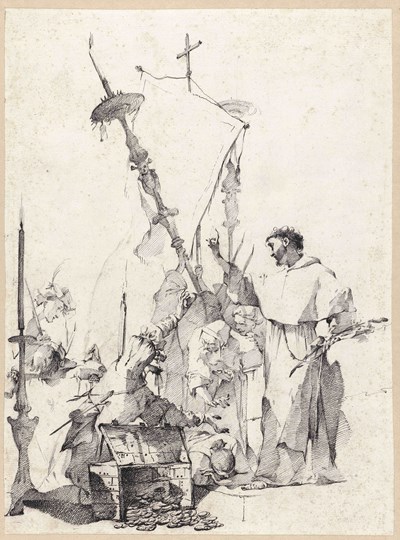 
This large and superbly preserved sheet is a rare early work by Giambattista Tiepolo, by whom only a few drawings survive from the beginning of his career. Like several of Tiepolo’s drawings from the initial phase of his activity - between 1715, when he painted his earliest known work, and 1730, when he undertook his first commission outside the Venice or the Veneto – the present sheet is characterized by strong pen hatching and brilliant light effects, and displays the particular influence of Giambattista Piazzetta. However, relatively little is still known of Tiepolo’s draughtsmanship between 1715 and 1725, largely due to the paucity of drawings from this important formative period. At the beginning of his career Tiepolo is known to have made large, finished drawings for sale as independent works, probably as a means of earning a steady income, and also produced drawings for prints and book illustrations. From about 1725 onwards, once his reputation as a painter had become firmly established, he seems to have produced fewer such autonomous drawings. That Tiepolo’s drawings were greatly admired early in his career can be confirmed by contemporary accounts; indeed, as early as 1732 – when Giambattista was thirty-six years old, and within a few years of the likely date of the present sheet - the contemporary writer and biographer Vincenzo da Canal remarked of the artist that ‘His talent is most fecund; that is why engravers and copyists are eager to engrave his works, to glean his inventions and extraordinary ideas; his drawings are already so highly esteemed that books of them are sent to the most distant countries.’ By the decade of the 1730s, however, Tiepolo seems to have stopped making drawings for sale, or dispersing of them in any way, and instead began the practice of carefully preserving his drawings in his studio. As such, drawings by Giambattista from the 1740s and beyond are numerous, since they were carefully kept by the artist and his son Domenico, but earlier drawings remain quite rare.The subject of this large drawing is taken from an episode in the life of Saint Anthony of Padua. Preaching in Florence at the funeral of a wealthy moneylender and speaking to his audience of the sin of greed, Anthony claimed that the body of the miser should not be buried in consecrated ground, for his soul was already suffering in hell. He added that the man’s heart was no longer in his body, in keeping with the words of the Gospel of Saint Luke: ‘For where your treasure is, there your heart will be also.’ (12:34). The body of the miser was cut open and it was found that indeed his heart was not within him, but was instead discovered in the dead man’s treasure chest.Giambattista Tiepolo’s use of a precise technique of parallel hatching in this drawing is a particular characteristic of many of the pen drawings from the early part of his career. Bernard Aikema has noted of this manner of hatching in Tiepolo’s youthful drawings that ‘its use was unprecedented in Venice, as compared to Bologna and Rome, where a number of draughtsmen were noted for the technique’. Aikema has also posited that this ‘meticulously elaborated drawing, with its painstaking registration of details, was probably not executed for a painting but rather for a print, like a number of other sheets by the artist with similar characteristics from this period’, although no related print survives. In its upright format, composition, and style, the present sheet, like other early autonomous pen drawings by Giambattista, may in turn have influenced the artist’s later Scherzi etchings of the late 1740s and 1750s. Among a handful of large, highly finished and stylistically comparable early pen and ink drawings by Giambattista Tiepolo are an Annunciation with the Holy Spirit in the Gabinetto Disegni e Stampe of the Museo Biblioteca Archivio in Bassano del Grappa, a drawing of The Holy Family Adored by Saints Sebastian and Francis, sold at auction in 1992 and today in a private collection, as well as a related, unfinished horizontal composition of The Virgin and Child with Saints in another private collection. Drawings of The Adoration of the Magi in the Pierpont Morgan Library in New York, King Syphax of Numidia before Scipio in an Italian private collection, and The Martyrdom of a Saint before a Statue of Jupiter, sold at auction in New York in 1995 and later in the Horvitz collection, are likewise close to the present sheet in technique and handling, as is a drawing of The Virgin and Child with Saints in a private collection.As Michael Levey has noted of a similar early pen and ink drawing by the artist, ‘Here the true Tiepolo, speedy, brilliant, superbly, even insolently, confident, has emerged.’