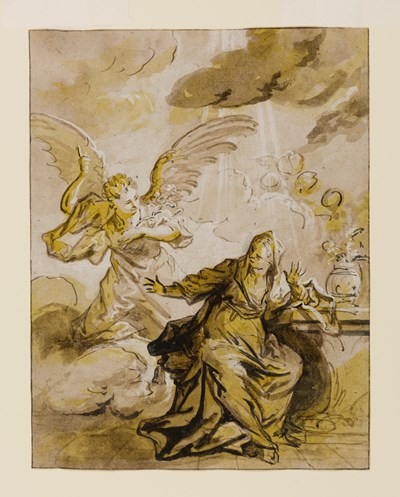 
An early drawing by the artist, the present sheet is very likely to have come from Oudry’s so-called 'livre de raison'; two albums of wash drawings, begun by the artist in June 1713, which recorded the compositions of all of his finished paintings, as well as many ideas for unexecuted works, over the next five or six years, until around 1718 or 1719. An indispensable record of Oudry’s activity during his earliest years as an independent artist, before his admittance into the Académie, the 'livre de raison' as it survives today is, unfortunately, largely incomplete. More than half of the contents of the two albums, including the present sheet, were removed and sold by the printmaker and publisher Gabriel Huquier, who owned the 'livre de raison' albums after Oudry’s death, long before the remainder were eventually acquired by the Louvre in 1957. The wash drawings of the 'livre de raison' are characterized by a free and colouristic draughtsmanship, with a wide ink border and an extensive inscription by the artist in the lower margin identifying the subject or sitter, date and size of the related painting. (Many of the loose drawings thought to have come from the two albums, however, have had their inscriptions and borders trimmed away.) Oudry is known to have painted only a handful of paintings of religious subjects, all in the earliest years of his career, and almost none of these survives. The present sheet may therefore record a lost, or perhaps never-executed, painting.

Two stylistically comparable early drawings of religious subjects by Oudry, both also from the 'livre de raison', are an Adoration of the Magi in the Courtauld Gallery in London, which is a study for an altarpiece of c.1717 in the church of Villeneuve-Saint-Georges, near Paris, and a drawing of The Judgement of Solomon in the Louvre, for which no related painting is known. The Courtauld and Louvre drawings, as well as the present sheet, were among just seven drawings of religious subjects, out of a total of some eighty sheets, that were removed by Huquier from Oudry’s 'livre de raison' albums within a few years of the artist’s death and sold at auction in 1761.

The eminent 18th century French printmaker, publisher, art dealer and collector Gabriel Huquier (1695-1772) assembled one of the largest collections of Oudry’s drawings and published several series of prints after them.