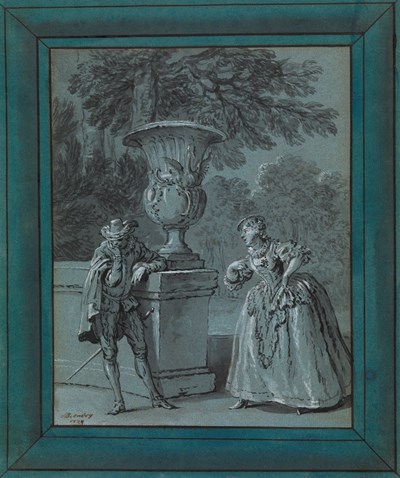 Belphegor, A Tale by Machiavelli: Roderic and Honnesta


Between 1729 and 1734, Jean-Baptiste Oudry produced a total of 276 superb, highly finished drawings, including a frontispiece, which illustrated 245 tales from the famous 17th century work by Jean de La Fontaine, the Fables choisies mises en vers (Selected Fables Rendered in Verse). Each scene was drawn with the brush with black ink and grey wash, heightened with white gouache, on sheets of blue paper, with each image surrounded with a wide border brushed on the same sheet in a darker shade of blue, acting as a fictive mount. The drawings, all made over this five-year period (with the exception of the frontispiece, which is dated 1752), have long been among the artist’s most famous works. Indeed, this complete set of illustrations to the Fables, as the Oudry scholar Hal Opperman has noted, ‘have done more to establish the image of Oudry that has come across the years, than any others of his productions.’ Nearly all of the drawings are signed and dated, and, to judge from the dates, the artist seems to have made the drawings in order, in the sequence that they appear in La Fontaine’s Fables. Oudry’s most ambitious undertaking as a draughtsman, the project to illustrate the Fables seems not to have been a commission, but instead was done on the artist’s own initiative, and his early biographer, the Abbé Louis Gougenot, notes that he worked on the drawings in the evenings.

The present sheet is one of four illustrations by Oudry depicting the story of Belphegor, presented as the 27th fable of Book XII of La Fontaine’s Fables. (The tale is derived from the 16th century novella 'Belfagor arcidiavolo' by Niccolò Macchiavelli, written between 1518 and 1527 and published in 1549.) As Opperman has noted, ‘This is a rather complex tale, not easy to illustrate in all its twists and turns. While the first and fourth drawings conform to events in a conventional narrative way, the middle two are of necessity less straightforward. Oudry did the best he could…The first scene sets the stage. At his court in Hell, Satan conducts a sort of poll of the damned, asking what it was that brought about their doom. A great majority assign the blame to their spouses. Hoping to capitalize on this finding to steer an even greater number of future souls to Hell, Satan and his council designate one of their number, the fallen angel Belphegor, as an envoy to the world, where he is charged to find a spouse, gain direct experience of matrimony, and bring back an explanation of why it is such an effective channel to perdition. This is the moment depicted in the first drawing.’

The first drawing in the sequence of four Belphegor episodes, which shared the same provenance as the present group of three drawings until 2002, is today in the collection of the J. Paul Getty Museum in Los Angeles.

The present sheet, the second in the sequence, continues the story. As Opperman writes, ‘The second scene characterizes the first phase of Belphegor’s embassy without directly depicting any particular event in La Fontaine’s poem. Belphegor, in the guise of a wealthy gentleman named Roderic, has settled in Florence where he is taken up in society and soon becomes a sought-after candidate for marriage. Above all the other eligible maidens he courts Honnesta, who plays hard to get and whose wily father exacts a munificent bride price. Roderic’s manipulative, quarrelsome, newly-won bride and her family reduce him quickly to abject misery. The second drawing shows the domineering Honnesta and the hapless, rueful Roderic.’

Provenance:
Sold by the artist, together with all of his drawings illustrating the Fablesof La Fontaine, to Jean-Louis Regnard de Montenault, in c.1751
Included in one of two albums containing all of Oudry’s drawings for the Fables of La Fontaine, with the booksellers Jean-Jacques and Marie-Jacques de Bure (Frères de Bure), Paris, by 1828
Jean-Jacques de Bure, Paris
His sale, Paris, 1-18 December 1853, lot 344 (bt. Thibaudeau for 1,800 francs)
Comte Adolphe-Narcisse Thibaudeau, Paris
Possibly given by him to the actress Mme. Eugénie Doche, and then sold by her for 2,500 francs to the bookseller Auguste Fontaine, Paris
Acquired from them for 5,000 francs in 1856 by Solar Aaron Euryale, known as Félix Solar, Bordeaux
His sale, Paris, Charles Pillet, 19 November – 8 December 1860, lot 627 (sold for 6,100 francs to Cléder for Baron Taylor)
Baron Isidore Taylor, Paris
Émile Pereire, Paris
The booksellers Damascène Morgand and Charles Fatout (Morgand et Fatout), Paris, probably by 1876
Acquired from them for 30,000 francs by Louis Roederer, Reims, by 1877
By descent to his nephew, Léon Olry-Roederer, Reims and Paris
Sold through Thomas Agnew and Sons, London, to Dr. A. S. W. Rosenbach, Philadelphia, in 1922
The Rosenbach Company, Philadelphia
Acquired from them by Raphael Esmerian, New York, in c.1946
His sale, Paris, Palais Galliera [Ader Picard Tajan], 6 June 1973, part of lot 46 (two albums sold for 2,000,000 francs)
One album with Art Associates Partnership (Dr. Claus Virch), New York and Bermuda, by whom the album disbound and the drawings contained therein – including the present sheet – thence sold separately
Private collection, Geneva
Adrian Ward-Jackson, London
Kate de Rothschild, London, and Didier Aaron Inc., New York, in 1993
Private collection.

Belphegor, A Tale by Machiavelli: Roderic and Honnesta