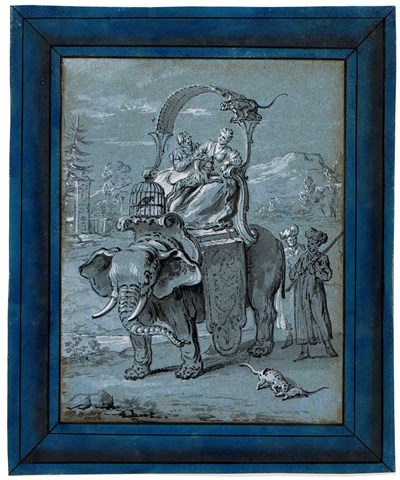 The Fables of La Fontaine: The Rat and the Elephant Sold


Between 1729 and 1734, Jean-Baptiste Oudry produced a total of 276 beautiful and highly finished drawings, including a frontispiece, which illustrated tales from the famous 17th century work by Jean de La Fontaine, the Fables choisies mises en vers (Selected Fables Rendered in Verse). Each scene was drawn with the brush with black ink and grey wash, heightened with white gouache, on sheets of blue paper, with each image surrounded with a wide border brushed on the same sheet in a darker shade of blue, acting as a fictive mount. The drawings, all made over this five-year period (with the exception of the frontispiece, which is dated 1752), 'form a remarkably coherent group, all closely similar in size, technique, and presentation', in the words of one scholar, and have long been among the artist's most famous works. Indeed, this complete set of illustrations to the Fables, as the Oudry scholar Hal Opperman has noted, 'have done more to establish the image of Oudry that has come across the years, than any others of his productions.' Nearly all of the drawings are signed and dated, and, to judge from the dates, the artist seems to have made the drawings in order, in the sequence that they appear in La Fontaine's Fables. Oudry's most ambitious undertaking as a draughtsman, the project to illustrate the Fables seems not to have been a commission, but instead was done on the artist's own initiative, and his early biographer, the Abbé Louis Gougenot, notes that he worked on the drawings in the evenings.It has been assumed that Oudry would have intended this series of drawings for the Fables to be engraved for publication, but this would have been a very expensive undertaking for the artist. Around 1751 Oudry sold the complete set of drawings to the amateur and collector Jean-Louis Regnard de Montenault, who decided to have them reproduced as prints and published as an illustrated book. Since Oudry's drawings were thought to be too free in execution to be used as models by the engravers, Montenault commissioned Charles-Nicolas Cochin the Younger to make copies of each of Oudry's drawings in a more linear style, and it was Cochin's drawings that were used by the large team of engravers who worked on the project. Montenault's celebrated edition of the Fables was published in four lavish volumes between 1755 and 1760, although Oudry himself did not live to see them. As Hal Opperman has pointed out, 'It must be said that the confrontation of Oudry's originals with the prints very much betrays the intermediary of Cochin. The human figures, in many cases, have benefited - but the animals have not. We state above that the La Fontaine illustrations, more than anything else, created and sustained posterity's idea of the scope and the intrinsic qualities of Oudry's art. But this judgment was based on the prints, not the drawings, which had almost never been seen: in fact, not one of them was even reproduced (in the modern sense) prior to the sale in 1973.'The original 276 drawings by Oudry for the Fables of La Fontaine were bound together in two albums of dark blue calf, which remained intact and passed through several notable private collections - successively those of Jean Jacques de Bure (1765-1853), Comte Adolphe-Narcisse Thibaudeau (1795-1856), Baron Isidore Taylor (1789-1879), Émile Pereire (1800-1875), Louis Roederer (1846-1880), Léon Olry-Roederer (d.1932), Dr. A. S. W. Rosenbach (1876-1952) and Raphael Esmerian (1903-1976) - until they were sold at auction in 1973. One of the volumes, containing illustrations from Books I to VI of the Fables, was eventually acquired by the British Rail Pension Fund and was sold again at auction in 19964. The second volume, illustrating episodes from Books VII to XII, was broken up in 1973 and the drawings dispersed. Many of the drawings from this second album are now in public collections, including the Rijksmuseum in Amsterdam, the Art Institute of Chicago, the J. Paul Getty Museum in Los Angeles, the Metropolitan Museum of Art and the Morgan Library and Museum in New York, the National Gallery of Canada in Ottawa, the Musée du Louvre in Paris and the National Gallery of Art in Washington, D.C., among others.The fable depicted in this drawing is taken from Book VIII, Fable XV:'A rat, of quite the smallest sizeFix'd on an elephant his eyes,And jeer'd the beast of high descent Because his feet so slowly went. Upon his back, three stories high, There sat, beneath a canopy, A certain sultan of renown,His dog, and cat, and concubine, His parrot, servant, and his wine, All pilgrims to a distant town.The rat profess'd to be amazedThat all the people stood and gazed With wonder, as he pass'd the road, Both at the creature and his load.'As if,' said he, 'to occupyA little more of land or skyMade one, in view of common sense, Of greater worth and consequence! What see ye, men, in this parade,That food for wonder need be made? The bulk which makes a child afraid? In truth, I take myself to be,In all aspects, as good as he.'And further might have gone his vaunt; But, darting down, the cat Convinced him that a rat Is smaller than an elephant.' Oudry's skill as a painter of both animals and landscapes is readily evident in many of the drawings for La Fontaine's Fables, which often display a very effective use of white heightening against the deep blue of the paper. Having remained in an album for over two hundred years, the present sheet is in remarkable condition.

Provenance:
Sold by the artist, together with all of his drawings illustrating the Fables of La Fontaine, to Jean-Louis Regnard de Montenault, in c.1751Included in one of two albums containing all of Oudry's drawings for the Fables of La Fontaine, with the booksellers Frères de Bure, Paris, by 1828Jean Jacques de Bure, ParisHis sale, Paris, 1-18 December 1853, lot 344 (sold for 1,800 francs to Thibaudeau)Comte Adolphe-Narcisse Thibaudeau, ParisPossibly given by him to the actress Mme. Eugenie Doche, and then sold by her for 2,500 francs to the bookseller FontaineAcquired from them for 5,000 francs by Solar Aaron Euryale, known as Félix Solar, in 1856His sale, Paris, Charles Pillet, 19 November - 8 December 1860, lot 627 (sold for 6,100 francs to Cléder for Baron Taylor)Baron Isidore Taylor, ParisÉmile Pereire, ParisThe booksellers Morgand et Fatout, Paris, probably in 1876Acquired from them by Louis Roederer, ReimsBy descent to his nephew, Léon Olry-Roederer, Reims and ParisSold through Agnew's, London, to Dr. A. S. W. Rosenbach, Philadelphia, in 1922The Rosenbach Company, PhiladelphiaAcquired from them by Raphael Esmerian, New York, in c.1946His sale, Paris, Palais Galliera, 6 June 1973, part of lot 46 (sold for 2,000,000 francs)Art Associates Partnership (Dr. Claus Virch), Bermuda, by whom one of the two albums disbound and the drawings contained therein - including the present sheet - thence sold separatelyAdrian Ward-Jackson, LondonDidier Aaron Inc., New YorkPrivate collection.

The Fables of La Fontaine: The Rat and the Elephant