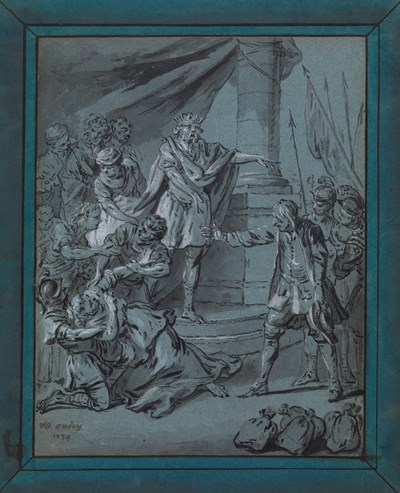 Belphegor, A Tale by Machiavelli: Matheo Before the King of Naples Sold


This final drawing of the Belphegor story sees the charlatan Matheo attempting to drive out the demon Belphegor from the possessed body of the daughter of the King of Naples. As Hal Opperman describes the scene, ‘By now Matheo has gained notoriety for his success as an exorcist of evil spirits. The king summons him and offers bags of money to drive out the demon from his daughter. Matheo, knowing that his powers are no longer effective without the complicity of Belphegor, tries to beg off, but the king gives him no way out: free his daughter from possession, or face the gibbet. Matheo makes a show of calling out the demon, but fails. As the king orders him seized and led off to his fate, Matheo requests a drumbeat accompaniment. The drum resounds, Belphegor’s spirit is terrified. Matheo recounts to the demon that Honnesta has found him, and the drumming is the sound of her arrival to claim him back. Filled with apprehension at the prospect, Belphegor flees the body of the young woman and returns directly to his infinitely preferable existence in Hell. In his fourth drawing, Oudry effectively captures the crux of the resolution of the tale.’

The original 275 drawings by Oudry for the Fablesof La Fontaine, together with a later frontispiece, were bound together in two albums of dark blue calf, which remained intact and passed through several notable private collections - successively those of Jean Jacques de Bure (1765-1853), Comte Adolphe-Narcisse Thibaudeau (1795-1856), Félix Solar (1811-1870), Baron Isidore Taylor (1789-1879), Émile Pereire (1800-1875), Louis Roederer (1846-1880), Léon Olry-Roederer (d.1932), Dr. A. S. W. Rosenbach (1876-1952) and Raphael Esmerian (1903-1976) - until they were sold at auction in 1973. One of the volumes, containing illustrations from Books I to VI of theFables, was eventually acquired by the British Rail Pension Fund and was sold again at auction in 19965. The second volume, illustrating episodes from Books VII to XII, was broken up in 1973 and the drawings it contained, including these three sheets, were dispersed. Several of the drawings from this second album are now in public collections, including the Rijksmuseum in Amsterdam, the Ackland Art Museum in Chapel Hill, North Carolina, the Art Institute of Chicago, the J. Paul Getty Museum in Los Angeles, the Metropolitan Museum of Art and the Morgan Library and Museum in New York, the National Gallery of Canada in Ottawa, the Musée du Louvre in Paris and the National Gallery of Art in Washington, D.C., among others.

Provenance:
Sold by the artist, together with all of his drawings illustrating the Fablesof La Fontaine, to Jean-Louis Regnard de Montenault, in c.1751
Included in one of two albums containing all of Oudry’s drawings for the Fables of La Fontaine, with the booksellers Jean-Jacques and Marie-Jacques de Bure (Frères de Bure), Paris, by 1828
Jean-Jacques de Bure, Paris
His sale, Paris, 1-18 December 1853, lot 344 (bt. Thibaudeau for 1,800 francs)
Comte Adolphe-Narcisse Thibaudeau, Paris
Possibly given by him to the actress Mme. Eugénie Doche, and then sold by her for 2,500 francs to the bookseller Auguste Fontaine, Paris
Acquired from them for 5,000 francs in 1856 by Solar Aaron Euryale, known as Félix Solar, Bordeaux
His sale, Paris, Charles Pillet, 19 November – 8 December 1860, lot 627 (sold for 6,100 francs to Cléder for Baron Taylor)
Baron Isidore Taylor, Paris
Émile Pereire, Paris
The booksellers Damascène Morgand and Charles Fatout (Morgand et Fatout), Paris, probably by 1876
Acquired from them for 30,000 francs by Louis Roederer, Reims, by 1877
By descent to his nephew, Léon Olry-Roederer, Reims and Paris
Sold through Thomas Agnew and Sons, London, to Dr. A. S. W. Rosenbach, Philadelphia, in 1922
The Rosenbach Company, Philadelphia
Acquired from them by Raphael Esmerian, New York, in c.1946
His sale, Paris, Palais Galliera [Ader Picard Tajan], 6 June 1973, part of lot 46 (two albums sold for 2,000,000 francs)
One album with Art Associates Partnership (Dr. Claus Virch), New York and Bermuda, by whom the album disbound and the drawings contained therein – including the present sheet – thence sold separately
Private collection, Geneva
Adrian Ward-Jackson, London
Kate de Rothschild, London, and Didier Aaron Inc., New York, in 1993
Private collection.

Belphegor, A Tale by Machiavelli: Matheo Before the King of Naples