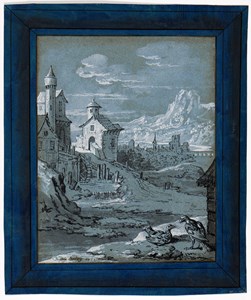 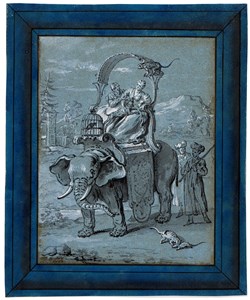 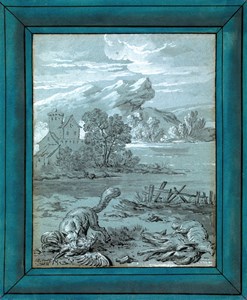 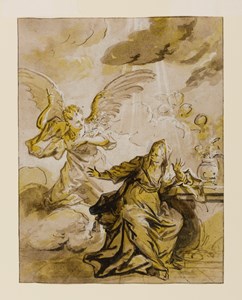 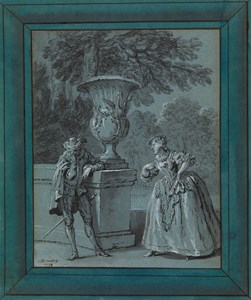 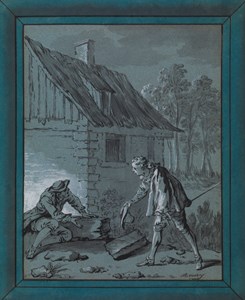 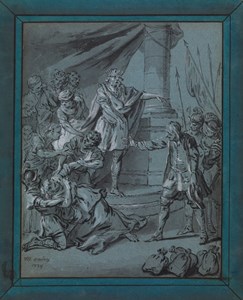 ‘Jean-Baptiste Oudry is one of the most prolific artists – and without question the most versatile – of the French eighteenth century. Once established he was also one of the most successful of his time.’ Such is the Oudry scholar Hal Opperman’s succinct description of the artist, who enjoyed a successful career of more than forty years. A pupil of Michel Serre and Nicolas de Largillière, Oudry took classes in drawing at both the Académie Royale and at the Académie de Saint-Luc of the Parisian painter’s guild, where he also later taught. The early part of his career found the artist painting mainly still life subjects and portraits. Admitted into the Académie Royale in 1719, by the following decade Oudry had come close to supplanting Alexandre-François Desportes as the leading painter of animals and hunting scenes. He began receiving significant royal commissions for paintings of hunts, and in 1725 was granted lodgings in the Tuileries palace. (The following year, at the request of Louis XV, he exhibited twenty-six of his paintings - the entire contents of his studio – in the Grands Appartements at Versailles.) It was also in 1726 that Oudry was engaged as a designer at the Royal tapestry works at Beauvais, where his masterpiece was the series of huge painted cartoons for the Chasses royales de Louis XV tapestries, eventually woven at the Gobelins, for which he was paid some 52,000 livres over a twelve-year period. In 1734 he was named director of the Beauvais factory, where he in turn soon employed the young François Boucher as a designer. The last fifteen years of his career saw Oudry paint numerous easel pictures of hunting scenes, dogs, game pieces and still life subjects, many of which were shown at the Salons. In 1743 he was appointed a professor at the Académie, where he had taught since 1739, although he does not seem to have been an inspirational teacher, and his only real pupil of any note was his son, Jacques-Charles Oudry. Apart from the King, Oudry counted among his most significant patrons the Swedish ambassador, Count Carl Gustaf Tessin, and the Duke of Mecklenburg-Schwerin. Oudry was a prodigious draughtsman, and drawings were an integral part of his artistic practice. Although the 18th century art historian Antoine-Joseph Dezallier d’Argenville wrote of him that ‘His finished drawings are all in black chalk, highlighted with white using the brush [and] his studies are also in black chalk, highlighted with white chalk’, and while it is certainly true that black and white chalks were his favoured medium as a draughtsman, Oudry worked also in pastel, red chalk, brown ink and sepia wash. While the Oudry scholar Hal Opperman catalogued around a thousand drawings by the artist, many of these were only known through descriptions in old auction catalogues. While Oudry parted with some drawings in his lifetime, the vast majority of his output as a draughtsman – mainly studies of animals and birds, highly finished landscapes and book illustrations, carefully organized into albums - remained in his studio until his death.