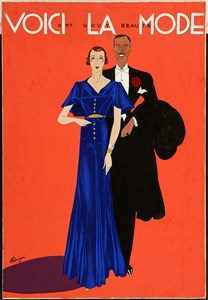 A leading fashion illustrator, draughtsman and lithographr, Léon Benigni worked with such designers and couturiers as Jeanne Lanvin, Marcel Rochas, Elsa Schiaparelli, Lucien Lelong, Jacques Fath, Jean Patou, Nina Ricci and Cristôbal Balenciaga. He produced drawings and cover designs for such magazines as Harper’s Bazaar, Femina, La Donna, Art Goût Beauté, The Bystander and Modes et Travaux, and also designed a number of travel posters in the 1920s and 1930s (notably one for the spa and ski resort of Brides-les-Bains in the Savoie region) and advertisements for Cadillac and LaSalle cars. In an appreciation of Léon Benigni, published in an English magazine article in 1933, it was noted that ‘M. Benigni is known to thousands through the medium of the leading fashion magazines. This young Frenchman has brought himself to the front rank of modern fashion artists. He has developed a style which fits perfectly with present ideas of fashion. Modern fashions contain an element of caricature, though they never lose their delicacy and charm. These qualities are apparent in Bénigni’s work. In avoiding heaviness and an exact representation, he works in line, and his line work is light and suggestive enough in its simplicity to hold all the attraction so necessary in publicity. The female face is depicted almost as a formula of design. The thin lines in which it is traced are not an accurate representation, but it is impossible to deny the conviction of reality carried by the design…an addition or alteration to any of these drawings of Bénigni’s, in the form of a few extra lines or corrections, would ruin the effect. They are, for their purpose, complete as they stand.’