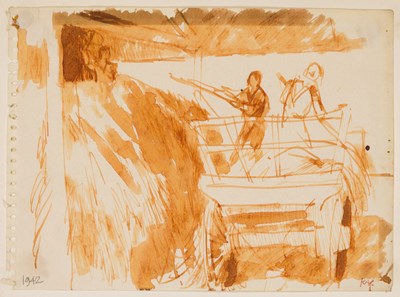 
While serving in the NCC during the Second World War, since there was a limited range of media that could be carried in a regulation army knapsack, Keith Vaughan became adept at expressing himself through the graphic mediums of ink, crayon and gouache. Dated 1942, the present sheet is a page from one of the many small sketchbooks that Vaughan filled with figure, landscape and compositional studies in pen and ink during this period. In the summer of that year the artist was stationed at a barracks in Codford in Wiltshire, near Ashton Gifford House, where he and his fellow soldiers were tasked with clearing the overgrown grounds. The early 1940s found Vaughan executing numerous drawings of his surroundings, the barracks and fellow soldiers and labourers, some in sketchbooks and some – known as the ‘Army Drawings’ - on much larger paper and typically filled out with gouache. Among his finished works of this period is a watercolour of The Wall at Ashton Gifford, today in the collection of the Manchester Art Gallery.