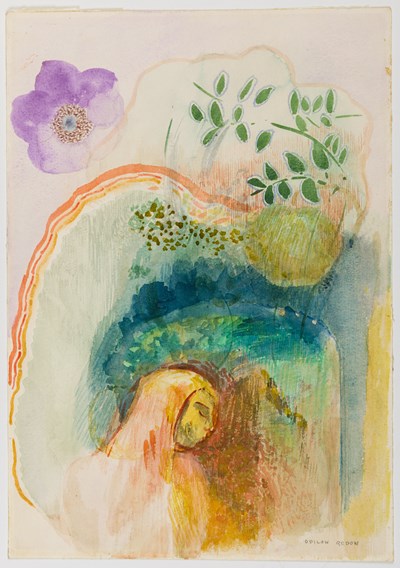 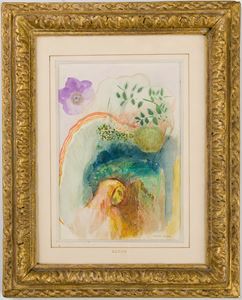 
Odilon Redon’s use of watercolour is largely confined to the later years of his career, and reflects a more reserved side of his experiments with colour. Hiis work in this fluid medium seems to have been done largely for his own pleasure. His late watercolours were never exhibited in his lifetime, and seem to have been retained by the artist until his death, after which a number of examples were sold by his widow to such private collectors as Jacques Zoubaloff. Redon’s work as a watercolourist was first seen by the public only in posthumous exhibitions of his work, such as that held at the Galerie Bernheim-Jeune in 1917, in which the present sheet was included, or at the Galérie Barbazanges in 1920.

Datable to the early years of the 20th century, this watercolour - which was last exhibited in 1961 - depicts a figure enclosed by a sort of colourful aura or nimbus; a motif found in several of Redon’s compositions of the first and second decades of the 20th century. Like many of the artist’s works, the subject of the present sheet remains enigmatic, though it may be loosely grouped with around fifty paintings, pastels and drawings which are dominated by the theme of figures with their eyes closed.