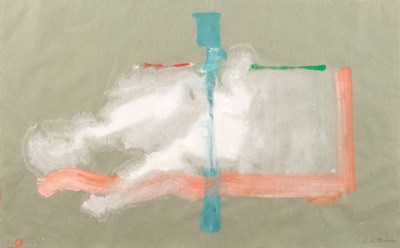 
Helen Frankenthaler has produced a large and varied body of vibrant works on paper – in ink, crayon, gouache, watercolour, oil, acrylic and pastel - throughout her long and storied career. Her drawings have been aptly described as ‘among her most spontaneous and personal works’ and were almost always produced as autonomous works in their own right, rather than preparatory exercises towards works in other media. As early as 1967, Frankenthaler was stressing the significance of drawing as well as colour in her work: ‘My conscious interest was more in drawing and the drawing of colorthan in color alone.’

As has recently been noted of the artist, ‘Helen Frankenthaler has spoken of the intimacy of the paper medium. Her late paintings on paper embody her belief in freshness, directness, openness, and immediacy…She has used papers tinted a wide range of colors. Some pieces were executed on Japanese paper and others on very unusual lawn grass paper. Frankenthaler has utilized brushes, sponges, rubber spatulas, and scraping devices. She has thinned her pigment so that it runs and pools…With all this variety, there is a powerful and consistent sensibility. It is present in her feeling for space and form, her unique choice of colors, and in the gestural signature of her body, arm, hand, and wrist.’

Karen Wilkin has noted of Frankenthaler that ‘throughout her long career, she has worked on paper with the same seriousness that she brings to her large-scale paintings, producing an impressive body of watercolors, gouaches, and mixed media works whose ambition, invention, and accomplishment are in no way inferior to that of her canvases. Each medium elicits different responses from Frankenthaler, yet all of her diverse efforts – whatever their materials, scale or process – depend for their impact on her distinctive handwriting, her faultless sense of tone and scale, and above all, her command of color. But of all of her investigations of various media, Frankenthaler’s works on paper enter into the most intimate dialogue with her canvases…Frankenthaler’s works on paper are never preparations for canvases but represent a parallel exploration; each line of enquiry informs the other.’