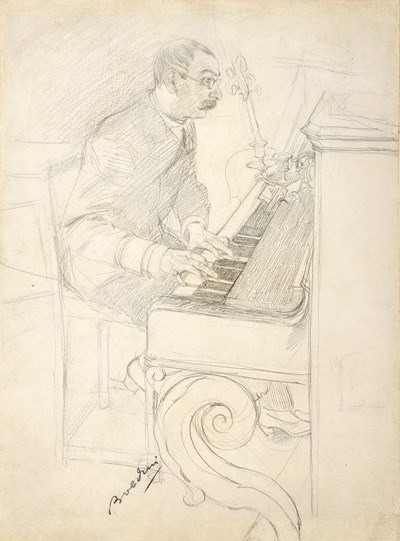 A Man Playing a Piano in the Artist’s Studio


Giovanni Boldini painted and drew numerous views of the interior of his two studios in Paris; the first on the Place Pigalle, where he worked soon after his arrival in Paris in 1872, and the second on the Boulevard Berthier, to which he moved in July 1886, after it had been vacated by John Singer Sargent. As Sarah Lees has written, ‘In the mid-1880s Boldini began a distinctive and very personal artistic exploration…He increasingly turned his attention to the interiors of his house and studio in a series of works that reveal a compelling universe of formal subjects and an unparalleled approach to communicating emotions and ideas…[Boldini] began using the spaces of his studio as a stage upon which to portray visits from friends, artists, and critics, or musical evenings that he attended or organized.’

This fine drawing depicts a man playing a piano in Boldini’s studio on the Boulevard Berthier. Although the identity of the sitter remains a mystery, the same man appears in a very small oil painting by Boldini of The Pianist in the Studio, executed around 1910 and today in a private collection. The painting depicts a corner of Boldini’s studio, with the unknown man seated at the artist’s piano in front of the painter’s full-length pastel portrait of Emiliana Concha de Ossa, propped against the wall in the background. What may be the same pianist also appears in a large pastel drawing in the collection of the Museo Boldini in Ferrara, and again at the very edge of the composition of an easel picture of The Singer of c.1884, in the Fondazione Carife collection at the Galleria d’Arte Moderna e Contemporanea in Ferrara.

The present sheet once belonged to the French artist Jean-Gabriel Domergue (1889-1962), a friend of Boldini who seems to have owned several works by the elder artist. In 1955 Domergue was appointed a curator at the Musée Jacquemart-André in Paris, where he organized a series of important monographic exhibitions. He had planned one devoted to Boldini, but this project was still unrealized at the time of Domergue’s death in 1962. The following year, however, an important exhibition of Boldini’s work was held at the Musée Jacquemart-André, in honour of Domergue.

A Man Playing a Piano in the Artist’s Studio