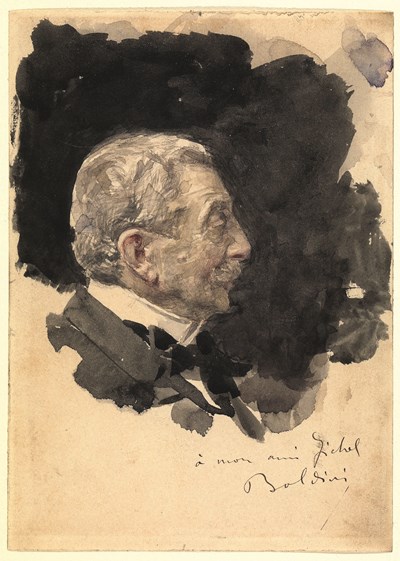 A Man in Profile (Portrait of Eugène Fichel) Sold

Black and grey ink and black and grey wash, with touches of red watercolour, over an underdrawing in pencil. Signed or dedicated à mon ami Fichel / Boldini at the lower right.178 x 125 mm. (7 x 4 7/8 in.)


The present sheet is closely related to an oil sketch on panel of Connoisseurs in an Artist’s Studio, which was among the contents of Boldini’s studio at the time of his death and is today in a private collection. The unfinished painting depicts the artist’s friend, the painter Paul César Helleu (1859-1927), standing with his back to the viewer and looking at a picture. Another man may be seen just in front of him, also standing; it has been suggested that this may be the American painter John Singer Sargent (1856-1925), who was a close friend of Helleu and was also painted by Boldini. This lively watercolour sketch is clearly a preparatory study for the third figure in the painting, the older man at the left, whose identity has long remained a mystery. He again appears, accompanied by the inscription ‘fameux connaisseur’, on Boldini’s pencil portrait of the same man, dated 1883, in the Robert Lehman Collection at the Metropolitan Museum of Art, New York. This gentleman also appears in another painting of a studio interior by Boldini, as well as in two etchings by the artist; one of the same man walking in the street and the other of him in an artist’s studio, in both instances wearing a top hat. Impressions of both etchings, one of which is known in two states, are today in the collection of the Museo Boldini in Ferrara.Based on Boldini’s dedication on the present sheet, this previously unknown man may now be identified as the French genre painter Benjamin Eugène Fichel (1826-1895). A pupil of Michel Martin Drolling and Paul Delaroche, Fichel made his debut at the Salon in 1849, and throughout his career showed mainly genre subjects in which the influence of his older contemporary Jean-Louis-Ernest Meissonier is evident. Fichel and Boldini seem to have been good friends and, together with such artists as Telemaco Signorini, moved in the same artistic circles in Paris. Boldini mentions Fichel in a letter of September 1880 to the Italian painter Serafino de Tivoli: ‘The Café de la Nouvelle Athènes mourns your loss ... Fichel goes there every night hoping to find yourself in a game of checkers.’ Boldini’s widow, Emilia Cardona, who met the artist near the end of his life and could not have known Fichel personally, described him only as ‘an old friend of artists [who] came to him and, with lens in hand, began to closely follow his work.’

A Man in Profile (Portrait of Eugène Fichel)