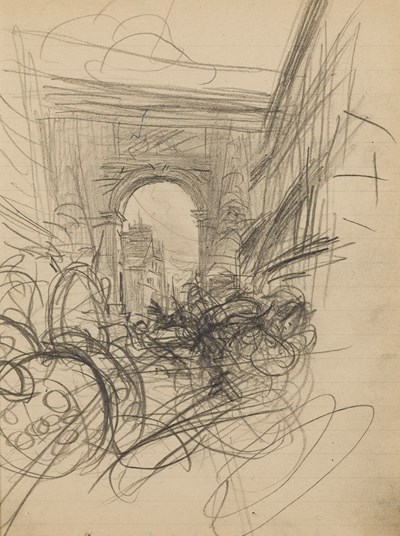 
Among of the contents of Boldini’s Parisian studio on the Boulevard Berthier at the end of his long career, the present sheet - like most of the artist’s drawings – is not related to a finished painting. From the time of his arrival in Paris in 1871 until the early years of the 20th century, Boldini made countless pencil drawings and sketches of the people, cafes, buildings, streets and sights of the sprawling city. As Richard Kendall has noted, ‘In Paris, most of the works on paper from his first years were directed at the city itself. This considerable body of drawings – all of them left tantalizingly undated – is both more disparate and more vivacious than any known sheets that had preceded them.’ Built between 1672 and 1676, the Porte Saint-Denis was, along with the nearby Porte Saint-Martin, the only city gate from the old fortifications of Paris to survive Baron Haussmann’s extensive renovation of the city in the 1850’s and 1860’s.

Provenance:
Among the contents of Boldini’s Paris studio at the time of his deathThe artist’s widow, Emilia Cardona Boldini, FerraraBy descent to her nephew, Mario MurariPrivate collection, Italy.