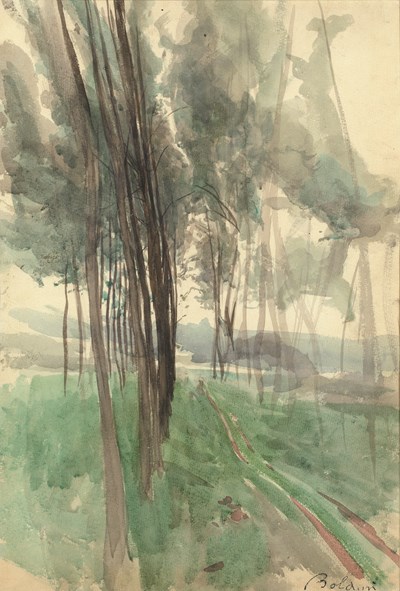 A Path Through Trees in the Bois de Boulogne Sold


Large-scale landscape watercolours such as the present sheet are a relatively small but choice feature of Boldini's oeuvre as a draughtsman. This impressive sheet, which can be dated to the early years of the 20th century, may be compared with a number of other large watercolour landscapes by the artist of the same period. These include a study of the Bois de Boulogne in a private collection in Bologna, as well as a study of poplars along a riverbank, signed and dated 1905, in a private collection and a large watercolour known as After the Storm, today in the Museo Boldini in Ferrara. Writing of another, stylistically comparable landscape in watercolour by Boldini, one recent scholar noted that 'its thin washes and delicate touches of opaque paint record the scene with a great economy of means. The direct, spontaneous quality of this work, almost certainly painted outdoors on the site, suggests that the artist had fully absorbed the principles of plein-air painting, though…he seems to have considered it most often in its traditional role as preparatory work, rather than as complete in its own right. This further differentiates him from his Impressionist colleagues.'The present watercolour probably depicts trees in the Bois de Boulogne in Paris, which the artist used as the setting for one of his finest paintings, a full-length double portrait of Captain and Mrs. Phillip Lydig Walking in the Bois de Boulogne of 1909, now in the collection of the Museo Boldini in Ferrara. A possibly related compositional sketch in pencil is in a Milanese private collection.

A Path Through Trees in the Bois de Boulogne