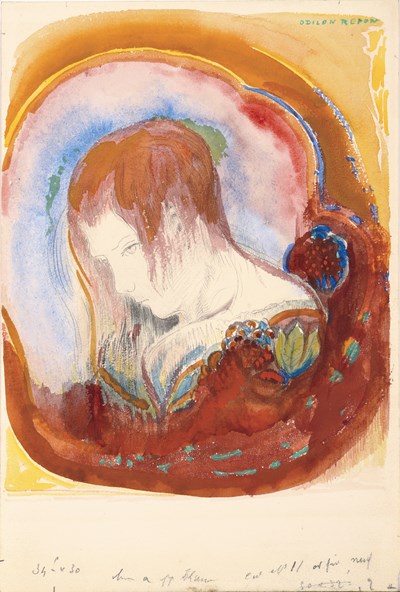 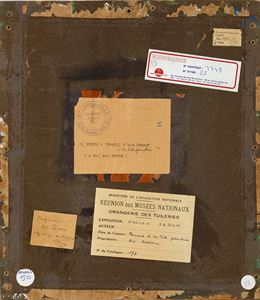 
Odilon Redon's work in watercolour reflects a more reserved side of his experiments with colour, and his work in this fluid medium seems to have been done largely for his own pleasure. His late watercolours were never exhibited in his lifetime, and seem to have been retained by the artist until his death, after which a number of examples were sold by his widow to private collectors. Redon's work as a watercolourist was first seen by the public only in posthumous exhibitions of his work, such as that held at the Galerie Bernheim-Jeune in 1917 or at the Galérie Barbazanges three years later, in 1920, in which the present sheet was shown for the first time.This subject of this magnificent, glowing late watercolour - aptly described by the Redon scholar Alec Wildenstein as a 'woman, young and with a rebellious pout, her hair dripping with water, [who] seems to come out of the waves' - is depicted enclosed by a sort of colourful aura or nimbus; a motif found in a number of Redon's paintings, watercolours and pastels of the second decade of the 20th century. Like many of Redon's works, the subject of the present sheet remains enigmatic. Throughout his career Redon produced paintings, pastels and drawings of heads in profile; often idealized, sometimes grotesque, and always somewhat mysterious. In remarkably fresh condition, this splendid watercolour once belonged to Redon's only son, Arï Redon (1889-1972), who inherited the bulk of the contents of his father's studio. (The present sheet has, in fact, occasionally been regarded as a portrait of Arï Redon as a child, but has more generally been identified as the head of a young girl, despite some superficial similarities with the appearance of Redon's son at the age of around ten or eleven.) In 1920 Arï Redon organized the retrospective exhibition of his father's work at the Galérie Barbazanges in Paris, which included this watercolour from his collection. Most of the rich assortment of works by Redon inherited by Arï was presented to the Louvre, in accordance with his wishes, by his widow Suzanne in 1982, ten years after his death. This watercolour, however, was acquired directly from Arï Redon by the Parisian dealer and collector Mira Jacob (1912-2004). Jacob opened her gallery in Paris, called Le Bateau-Lavoir after the famous artist's studios in Montmartre, in 1955. Located on the rue de Seine, the gallery specialized in drawings and prints by artists of the 19th and 20th centuries, with a particular emphasis on Symbolist works. Apart from her activities as a gallerist, Jacob owned an impressive private collection of drawings and prints, dominated by the work of Odilon Redon and Paul Delvaux. She held two exhibitions of prints and drawings by Redon at Le Bateau-Lavoir, in 1969 and 1979, and translated the artist's memoirs A soi-même into English in 1986. Jacob assembled a personal collection of works by Redon of great breadth and variety, much of it acquired from Arï Redon.