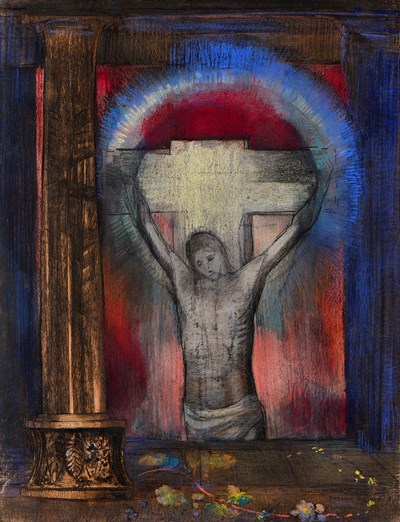 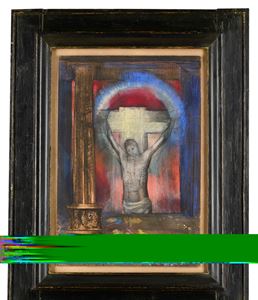 Christ on the Cross Sold


Odilon Redon’s pastels account for some of his finest works. In an 1897 letter to his close friend Andries Bonger, the artist wrote of his use of the medium: ‘The pastel, in fact, gives me support, materially and morally, it has rejuvenated me. I work with it, without getting tired. It has led me to paint; in looking at the work that I have just done, I am not without hope of transferring to canvas certain ideas a little later.’1 As the Redon scholar Roseline Bacou has noted, ‘In but a few years, Redon had completely mastered the technical demands of pastel...Up to the end of his life, the pastel would be a particularly special means of expression for Redon.’The figure of Christ was a recurring theme in Redon’s oeuvre between 1895 and around 1910. As Bacou notes, ‘The pastels of 1895-1899 are dominated by the figure of Christ: the Sacred Heart with a colored flame at the center of his chest; the Christ of Silence, with a finger upon his lips; Christ with the red thorns; Christ on the Cross...The use of such religious imagery, however, was not related to a strict belief in religious doctrine on Redon’s part...In the pastels executed during this period, the intensity of the colors echoes the ardent spirituality of the themes.’The present sheet has remained very little known to most scholars, having been in a Japanese collection since at least the early 1950’s. The work was published for the first time by Klaus Berger in 1964, and again the following year in an article describing works by Redon in Japanese collections, in which he noted that ‘However strange may seem the presence of Christ in the collection of a non-Christian country, the fact confirms once more that the art of Redon was accepted by the Japanese as a link between East and West, and they, with their usual zeal, wished to know all its aspects.’ The present pastel has never previously been exhibited outside Japan, where it was last shown in 1989. After more than fifty years in Japanese collections, The Crucified Christ was sold at auction in New York in 2002, when it entered a private collection in which it has remained ever since. When the present pastel was last exhibited in public, twenty-five years ago in Japan, the author of the catalogue entry noted of it: ‘For some reason, this Christ on the Cross is set inside a room with no exit. It is a Redon pastel which we can be proud to have in Japan...The image of Christ appears, emitting light, behind a pillar in a dark room, this dense interior contains the deep spirituality characteristic of Redon’s religious pictures.’ In superb condition, the present work has retained all of its freshness and richness of colour, and as such presents a consummate example of Redon’s pastel technique.Alec Wildenstein’s catalogue raisonné of Redon’s oeuvre lists a total of just fifteen depictions of the subject of Christ on the cross, including two small paintings, five pastels and eight drawings in chalk, pencil or charcoal. Among the handful of pastel drawings of Christ on the Cross by Redon is a large example, showing just the head and upper torso of Christ, in the Koninklijk Museum voor Schone Kunsten in Antwerp and a Crucifixion in the E. G. Bührle Collection in Zurich, as well as another, smaller pastel sold at auction in London in 1989.

Christ on the Cross