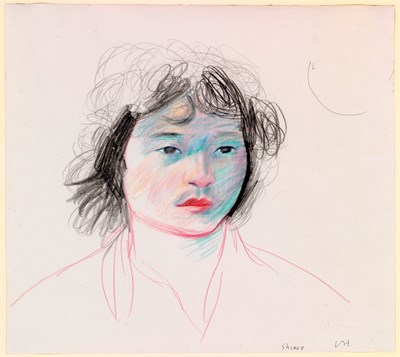 
The subject of this portrait drawing is a young Japanese artist who befriended Hockney in the late 1970's. According to the sitter, the present sheet was drawn in the early months of 1978. Born in 1955, Shinro Ohtake completed his artistic studies at the private Musashino Art University in Tokyo. Ohtake’s early work shows the influence of English Pop Art, and soon after his graduation he travelled to the north of England to try and meet Hockney, his idol.As Hockney wrote in an introduction to the catalogue of Ohtake’s first one-man exhibition, held at the Gallery Watari in Tokyo in 1982:‘I met Shinro through my mother who lives in Bradford, England, about 200 miles north of London. Shinro had noticed an address in a section of my book on my own work, in a letter dated 1952. He had taken the train from London, found the house, and knocked on the door. My mother explained I hadn’t lived there for many years and, inviting him into the house, enquired where he was from. Shinro, in his halting English, had said Tokyo, and my mother thought he said “York”, about 35 miles from Bradford. As the truth came out and Shinro explained, he had come up from London. My parents invited him to stay the night as the last train back to London had left.My parents were charmed by Shinro (and he by them) and I eventually heard of his adventures from my mother who told me I should meet him.A few months later we met in London (I had been in the USA at the time of Shinro’s trip to Bradford) and I too was charmed by him.Conversation at first was difficult, but over the years Shinro’s English improved (and my Japanese is non existant), and we have had interesting conversations.His work has a liveliness and curiosity about European Art that is refreshing but I explained to him how European art had been influenced by the Japanese woodcut, so his curiosity and influence has a respectable history.I told Shinro of my own admiration for the contemporary artists of Japan who work in the traditional style. Unknown in Europe I had only seen their work on my visit to Japan in 1971. Shinro very kindly sends me books about their work, so an East West dialogue goes on.That a Japanese artist should travel to Europe and be influenced by it in a lively way is a repeat of the nineteenth century European’s travels to Japan (ie. by seeing the art) and being absorbed by it, so Shinro’s art is both untraditional in a Japanese sense, and yet in a wider sense of art’s universal language.’Shinro Ohtake’s oeuvre is made up largely of books, collages, assemblages and paintings, revealing the inspiration not only of Hockney but also of such artists as Robert Rauschenberg, Kurt Schwitters, Jean Dubuffet and Jean-Michel Basquiat. Shinro Ohtake’s friendship with Hockney is reflected in the intimacy with which the artist has drawn him, and in the affection with which he is here portrayed. The drawing highlights Hockney’s superb draughtsmanship, and underscores the artist’s devotion to the art of portraiture; a characteristic of his work over his career.