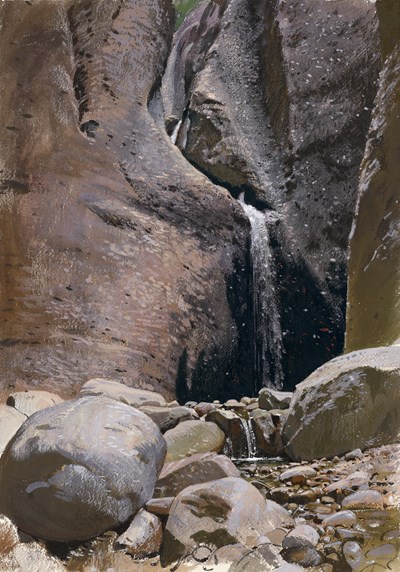 A Waterfall in Switzerland Sold


A remarkably accomplished draughtsman, Hirémy-Hirschl produced a large number of figure and drapery studies in charcoal or chalk, intended as preparatory studies for his paintings, as well as a number of autonomous landscape studies in pastel, watercolour and gouache. As one scholar has noted, ‘In his nature studies, Hirémy Hirschl found for the first time a way to achieve a subtle but at the same time a more natural colour scheme, and from 1900 onwards critics regularly praised the beauty of his small landscapes and portraits as compared to his historical paintings, about which opinion tended to be rather negative…his best productions were on paper in watercolours, gouache, and pastel.’ This large watercolour presumably depicts a waterfall in the mountain valley of Engadin in the Swiss canton of Graubünden, where the family of the artist used to visit for holidays. A comparable, large watercolour and gouache drawing of a mountain waterfall was exhibited in Chicago in 1984.This drawing, together with the rest of the contents of Adolf Hirémy-Hirschl’s studio in Rome, remained in the possession of the artist’s descendants for many years after his death. This large cache of drawings, watercolours, pastels and oil sketches was only dispersed in the early 1980’s.

Provenance:
The artist’s studio, Rome, and by descent to his daughter MaudThence by descent to a private collectionGalleria Carlo Virgilio, Rome, in 1981Matthiesen Fine Art, London, in 1987.

A Waterfall in Switzerland