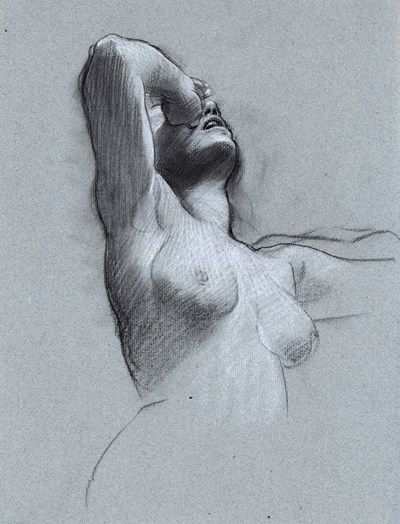 
A preparatory figure study for one of Hirémy-Hirschl’s major allegorical paintings, Souls on the Banks of the Acheron, painted in 1898 and today in the Österreichischen Galerie Belvedere in Vienna. This massive canvas depicts damned souls imploring Hermes, their guide, to allow them to return to the upper world, as Charon’s boat approaches to take them to Hades. The figure in this drawing appears at the centre of the composition, in the background. Arguably Hirémy-Hirschl’s masterpiece, Souls on the Banks of the Acheron is certainly his best-known work. The painting was first exhibited in Vienna in 1898, and again at the Esposizione Internazionale di Belle Arti in Rome in 1904. In 1908 it was shown at the commemorative exhibition held in Vienna on the 50th anniversary of the reign of the Emperor Franz Joseph I, when it was acquired by the state for the modern art museum of Vienna.

Study of a Despairing Female Nude