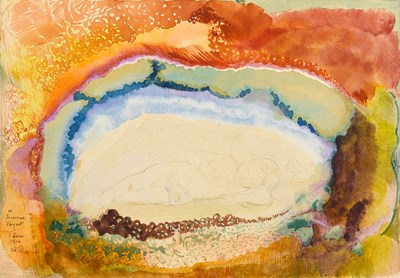 
Although Odilon Redon had worked in watercolour as a youth at the beginning of the 1860’s, it was not until some thirty years later that he began again to work seriously in the medium. His watercolours, however, reflect a more reserved side of his experiments with colour, and his work in this fluid medium seems to have been done largely for his own pleasure. Redon’s use of the watercolour medium is largely confined to the later years of his career, as one scholar has noted, ‘when he turned from working primarily in black to enthusiastically embrace color. Indeed, the watercolors seem to have had a somewhat more private role in his oeuvre than his work in other media. Although he discussed his noirs, or fusains (charcoal drawings), his prints, pastels, and paintings in his correspondence – and in his posthumously published writings on art – watercolor is never discussed. The mature watercolors, however, treat themes that concerned the artist throughout his career, and some...are complete and accomplished works of art.’ Redon’s late watercolours were never exhibited in his lifetime and seem to have been retained by the artist until his death, shortly after which a number of examples were sold by his widow to private collectors. Redon’s watercolours were first seen by the public only in posthumous exhibitions of his work, such as that held at the Galerie Bernheim-Jeune in 1917.This extraordinary watercolour, which was given by Odilon Redon to Simone Fayet (1899-1961), the eldest daughter of his friend and patron Gustave Fayet, on New Year’s Day of 1916. A painter, collector and museum curator, Gustave Fayet (1865-1925) was a champion of several modern artists in the late 19th and early 20th centuries, in particular Gauguin and Redon. He owned over a hundred works by Gauguin and also collected many works by Redon, mainly from 1908 onwards. Fayet first met Redon in 1900, and in 1910 he commissioned two large murals from Redon to decorate the library of the Cistercian abbey of Fontfroide, near Narbonne, which Fayet had purchased and begun restoring in 1908.The sleeping child in this drawing is depicted enclosed and protected by a sort of colourful aura or shell; a motif that is found in a number of Redon’s paintings, watercolours and pastels of the second decade of the 20th century. This tender and delicate composition, however, differs from Redon’s more sensual and, at times, disturbing images of Venus or Andromeda-like figures similarly enclosed in these organic shell-like forms, which are also sometimes reminiscent of underwater flowers.Gustave Fayet’s daughter Simone would have been about fifteen years old at the time that Redon gave her this vibrant watercolour. The artist had, several years earlier, painted two pastel portraits of Simone as a young girl. In 1919 Simone Fayet married Paul Bacou, a government minister and diplomat; their daughter Roseline Bacou was to become one of the leading scholars of Redon’s oeuvre, and organized the first major modern retrospective of the artist’s work in Paris in 1956.Given to Simone Fayet just six months before the artist’s death, and never before published or exhibited, this splendid watercolour remained in the possession of the Fayet and Bacou families until 2011.

Provenance:
Presented by the artist to Simone Fayet, Béziers, on 1 January 1916Thence by descent until 2011.