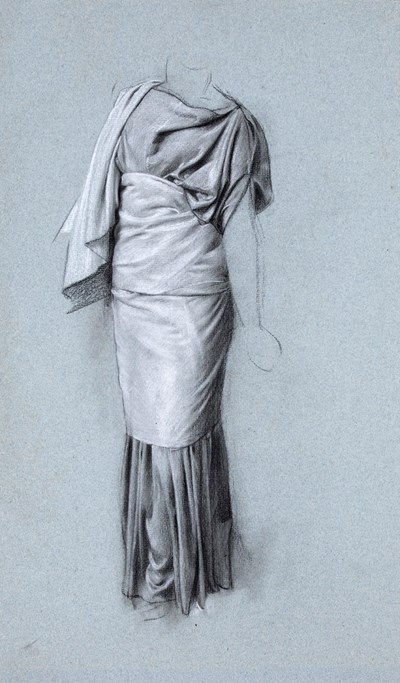 
This is a preparatory study for the drapery of a woman in the centre background of Hirémy-Hirschl’s painting of A Wedding Procession in Ancient Rome, completed in 1891. The painting depicts the moments before a classical wedding, when the bride is led to the house of the bridegroom, accompanied by bridesmaids singing hymns to the god Hymeneus. The painting won the ‘Kaiserpreis’; a prize awarded by the Künstlerhaus in Vienna when it was exhibited there in 1891. The painting was also shown in the same year in Berlin, but is now lost.As a modern scholar has noted of Hirémy-Hirschl’s drawings in this period of his career, ‘In the early years, he was mainly concerned with the beauty of drapery, superimposed layers and fine pleats, almost abstract shells and folds, a predilection well suited to academically idealised antique cloth and to the wide flowing robes of the Orient. Close attention was also given to the contours of the body and to the turn of a hand or the spread of fingers.’