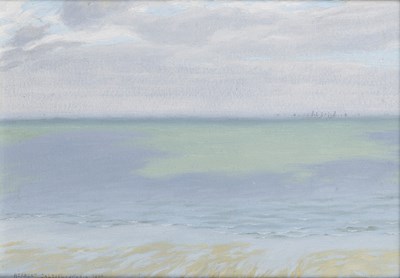 Study of Sea and Sky Sold


Herbert Dalziel produced a number of beautiful, atmospheric landscape paintings, of which the present work is a particularly fine example. The artist settled in Herne Bay in Kent, where many of his seascapes were painted. This delicate seascape, painted in oil on paper and dated the 3rd and 4th of July, 1924 - is part of a small group of plein-air studies of sea and sky that remained in Dalziel’s studio at the time of his death. These refined, subtle landscapes show the particular influence of James Abbott McNeill Whistler, whose work was reproduced by Dalziel Brothers and who Herbert Dalziel knew in person.

Provenance:
The studio of the artist, and by descent to his daughter AilsaThe Dalziel studio sale (‘The Dalziel Family, Engravers and Illustrators, from the Studio of Herbert Dalziel’), Sotheby’s Belgravia, 16 May 1978, part of lot 119 (‘Sea and sky studies, five, all signed, one dated September 1923, four dated from June to September 1924, all on paper, unframed, each 8 by 11 in; 20 by 28 cm’)Christopher Wood Gallery, LondonMaas Gallery, London.

Study of Sea and Sky