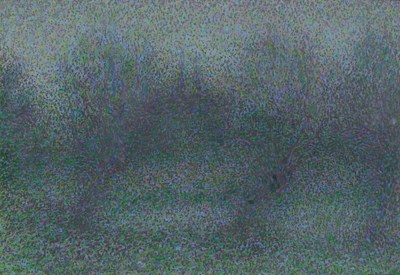 
Dated 1910, this delicate landscape, painted in oil pastel on paper, is among a small group of plein-air studies that remained in Herbert Dalziel’s studio at the time of his death. These refined, subtle landscapes show the particular influence of James Abbott McNeill Whistler, whose work was reproduced by Dalziel Brothers and who Herbert Dalziel knew in person. Part of a small group of paintings, pastels and oil sketches in which he adopted a Neo-Impressionist technique, the present sheet is one of the first works by Dalziel to reveal his interest in capturing atmospheric effects in his landscapes. As Kenneth McConkey has noted, ‘In an extraordinary departure, around 1910, Herbert Dalziel abandoned his conservative style and produced a number of jewel-like landscapes which adopt a sophisticated divisionism...At face value these might be regarded as belated emulations of Seurat, although the sense of atmosphere and weird luminosity draws comparisons with contemporary photography and the mystic landscapes of [Fernand] Khnopff.’

Provenance:
The studio of the artist, and by descent to his daughter Ailsa
The Dalziel studio sale (‘The Dalziel Family, Engravers and Illustrators, from the Studio of Herbert Dalziel’), London, Sotheby’s Belgravia, 16 May 1978, part of lot 130
Martyn Gregory, London.