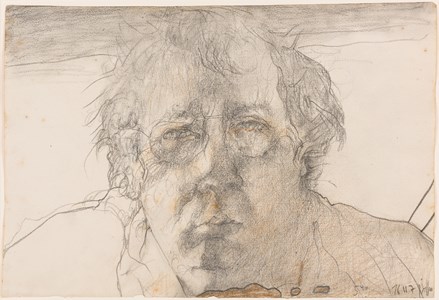 The German draughtsman, illustrator and printmaker Horst Janssen was raised in the city of Oldenburg by his mother and grandparents, and never knew his father. Between 1946 and 1951 he studied at the Landeskunstschule in Hamburg, where his teacher was the painter and engraver Alfred Mahlau. (He was later offered a professorship at the Hamburg academy, but turned down the opportunity.) In 1948 he published a children’s book and in the early 1950s began developing his skills as a printer and lithographer. Hugely prolific, Janssen produced a large number of drawings, etchings, lithographs, woodcuts and wood engravings characterized by dreamlike and often erotic imagery, creating a distinctive body of work – landscapes, still life subjects, portraits and self-portraits, often incorporating literary references and texts - that was quite unusual within the context of postwar European art. In the early part of his career he rarely exhibited his work outside Hamburg, and if he sold a print or drawing it was usually for a relatively modest amount – between 50 and 100 Marks for a print and between 200 and 850 Marks for a drawing – to a small coterie of collectors whom he knew. As he said at around this time, ‘I want to know who has my pictures. Out of vanity. Besides, I love them.’ Janssen’s first retrospective exhibition of almost 180 drawings and prints was held in 1965 at the Kestner-Gesellschaft in Hanover, leading the director of that institution, Wieland Schmied, to describe the artist as ‘the greatest draughtsman apart from Picasso. But Picasso is a different generation.’ The exhibition later travelled to several cities in Germany and also to Basel, and led to Janssen’s work becoming much more widely known outside Hamburg. His output never slackened, and his intensely personal vision continued to find new avenues of expression. He also often created drawings and prints inspired by foreign works of art, and in 1972 published an appreciation of the printed landscapes of the 19th century Japanese artist Hokusai. During his lifetime, Janssen won several important prizes and awards – including the first prize for graphic art at the Venice Biennale of 1968 - and his drawings and prints were widely exhibited throughout Europe, as well as in America, Russia and Japan. Significant exhibitions of his work were held in Mannheim in 1976, at the Documenta VI in Kassel the following year, at the Art Institute of Chicago in 1980 and the Albertina in Vienna in 1982. Janssen died in Hamburg in 1995, at the age of sixty-five. Five years later the Horst Janssen Museum in the artist’s hometown of Oldenburg, dedicated to the artist’s work, was inaugurated.