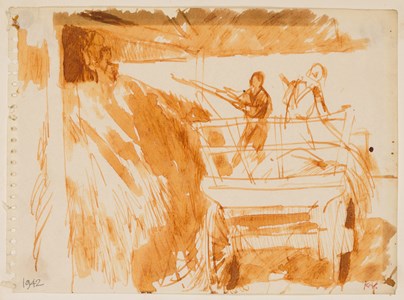 Born in Sussex, Keith Vaughan moved with his family to North London around the start of the First World War. He showed a gift for the arts from a very young age, earning a Royal Drawing Society certificate at the age of just seven years old, but remained for the most part self-taught. While at boarding school, Vaughan was given special entitlements to study art, since he was the first student to specialize in it, and it was at the Christ’s Hospital school that he mounted his first exhibition of landscapes. At the age of nineteen, Vaughan began work as a trainee in the art department of the advertising firm Lintas, where he remained until just before the start of the Second World War. In 1939 he left the firm and moved to the country, intending to paint for a year; this would be the first consistent time Vaughan would spend as a fine artist since his school days. During the Second World War, Vaughan declared himself a conscientious objector, and was conscripted into the Non-Combatant Corps (NCC). It was during the war that Vaughan came into contact with such contemporaries such as Graham Sutherland and John Minton, both of whom were highly influential on the artist’s developing career. It was also during this time that Vaughan began exhibiting his work, first in 1943 in a group exhibition of War Artists organized by Kenneth Clark at the National Gallery in London, followed by a solo show of gouaches and drawings at the Alex Reid & Lefevre Gallery in London the following year. In 1946 Vaughan held his first exhibition of paintings at the Reid & Lefevre Gallery, and the same year moved into a house and studio with Minton, working closely alongside him for the next six years. The artist’s postwar style was very different from that of the 1930s, with Vaughan focussing almost entirely on oils and more fully finished compositions, and turning away from the English romanticism of his earlier work. Focussing on the nude male form, Vaughan’s work became more and more abstract. In his later years he taught at the Camberwell College of Arts, the Central School of Art and the Slade School. Suffering from cancer, he committed suicide in London in 1977.