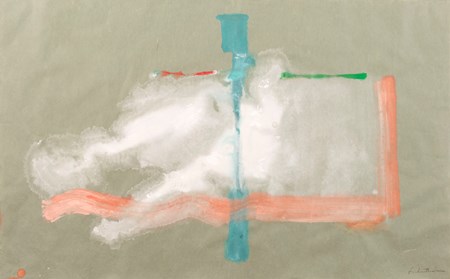 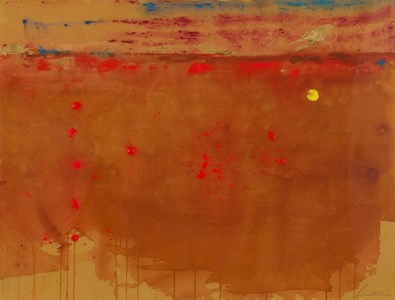 Helen Frankenthaler studied first at Brearley and then at the Dalton School in New York, where her first art teacher was Rufino Tamayo, before enrolling at Bennington College in Vermont. Her early work was strongly influenced by the paintings of Willem de Kooning and Arshile Gorky, as well as the earlier work of Wassily Kandinsky. Soon after setting up her studio in New York in 1951 Frankenthaler became close friends with the eminent art critic Clement Greenberg, with whom she was to be in a relationship for several years. When the painter Adolph Gottlieb saw her paintings at Greenberg’s apartment, he included a painting by her in his selection for a group exhibition at the Kootz Gallery in 1950. The following year Frankenthaler was the youngest artist to be included in the Ninth Street Show, an exhibition organized by members of the New York School, and also had her first solo exhibition, at the Tibor de Nagy Gallery. Perhaps the most significant event of 1951, however, was her discovery of the work of Jackson Pollock at an exhibition at the Betty Parsons Gallery. Greenberg introduced her to Pollock the following year, and she began closely studying his methods and work. The influence of Pollock on her own work was to be significant. As Barbara Rose has noted, ‘The overt physicality of Pollock’s method, the sense of the painting having been, as Frankenthaler puts it, “choreographed”, made possible a large scale, a boldness and an openness that appealed to her.’ Even before meeting Pollock, Frankenthaler had already experimented with working on the floor rather than on a painting on an easel. Now she began pouring and spilling paint directly onto raw, sometimes unprimed canvas. ‘Extending Pollock’s method by thinning down her medium so that paint not only sank into but soaked right through canvas, she created a stained image that was not literally on top of or illusionistically behind the picture plane but literally in and of the ground.’ In 1953 the painters Kenneth Noland and Morris Louis visited Frankenthaler’s studio and came away impressed with what they had seen, and soon the three painters were making regular studio visits to each other. Frankenthaler continued to have one-man exhibitions at the Tibor de Nagy Gallery between 1953 and 1958, and in later years at the André Emmerich Gallery. In 1958 she married the artist Robert Motherwell, and two years later an early retrospective exhibition of her work, curated by Frank O’Hara, was mounted at the Jewish Museum in New York. By this time her work had been acquired by the Museum of Modern Art in New York, while in 1959 she had been represented in the Documenta exhibition in Kassel. Solo gallery shows of her work - in New York, Los Angeles, Paris, London and elsewhere - continued throughout the 1960s. As Rose has written, ‘Among the radiant stained canvases of Helen Frankenthaler are some of the most beautiful as well as some of the most historically significant works of the nineteen fifties and sixties.’ Frankenthaler was one of three artists chosen to represent the United States at the Venice Biennale of 1966, and in 1969 was the subject of a major retrospective exhibition at the Whitney Museum of American Art in New York; a show that later travelled to England and Germany, and introduced her work to a much wider public. Helen Frankenthaler has said that ‘A really good picture looks as if it’s happened at once. It’s an immediate image. For my own work, when a picture looks labored and overworked, and you can read in it – well, she did this and then she did that, and then she did that – there is something in it that has not got to do with beautiful art to me. And I usually throw those out, though I think very often it takes ten of those over-labored efforts to produce one really beautiful wrist motion that is synchronized with your head and heart, and you have it, and therefore it looks as if it were born in a minute.’