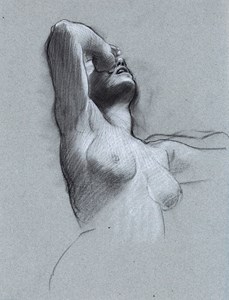 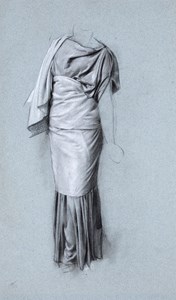 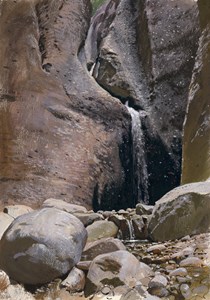 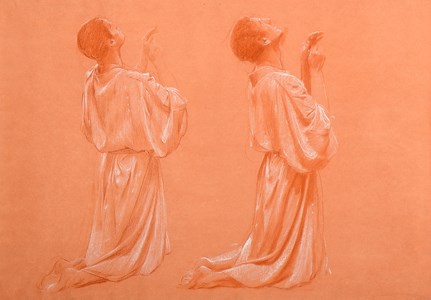 Born in the Hungarian town of Temesvár, Adolf Hirschl was raised in Vienna, where in 1878 he obtained a scholarship to the Akademie der bildenden Künste. In 1880 his first major canvas, Farewell: Scene from Hannibal Crossing the Alps, won a prize for historical painting. This was followed two years later by a second prize that allowed him to visit Rome, where he lived until 1884. His experiences in Rome were to have a profound effect on his work, notably in his preference for scenes from ancient Roman history. On his return to Vienna Hirschl exhibited a large canvas of The Plague in Rome, painted in 1884, to considerable acclaim. He soon established a successful career as a painter, receiving numerous commissions and producing grand, complex compositions of historical or allegorical subjects that were widely praised by critics and connoisseurs. Dramatic subjects such as Ahasuerus at the End of the World, painted around 1888, reveal another aspect of the artist’s imaginative approach to subject and composition. Hirschl’s paintings were exhibited throughout Europe, and the artist reached the peak of his Viennese career when he won the Imperial Prize in 1891. Despite his status as one of the leading artists in fin-de-siècle Vienna, as the turn of the century approached his work began to be overshadowed by the more progressive and radical paintings of Gustav Klimt and the artists of the Vienna Secession movement. In 1898 Hirschl married an Austrian-born Englishwoman who divorced her husband to marry him; the wedding scandalized polite society in Vienna and led the artist to sever his links with the city. Adopting the Hungarian name Hirémy, he soon afterwards moved to Rome, where he spent the last thirty-five years of his career, and where a retrospective exhibition of seventy of his works was held in 1904. Four years later, in 1908, his painting of Souls on the Banks of the Acheron, painted a decade earlier in 1898, was exhibited at the Imperial Jubilee exhibition in Vienna, where it was purchased by the state. An eminent member of the expatriate artistic community in Rome, Hirémy-Hirschl was admitted into the Accademia di San Luca in 1911. He remained largely immune to the latest avant-garde trends in art, both in Vienna and in Rome, preferring to work in his own distinctive manner. As one contemporary critic wrote, ‘He is a very hard as well as a very scrupulous worker, and one who goes on his own way undaunted, never imitating or letting himself be influenced by what others are doing.’1 Unfortunately, a number of the artist’s important history paintings are lost, notably The Plague in Rome of 1884. One of his last large-scale canvases was the huge polyptych Sic Transit..., a vast allegory of the fall of the Roman Empire and the rise of the Christian era, completed in 1912 and exhibited in Vienna the following year. During the First World War, Hirémy-Hirschl worked as a war correspondent for Austria, making drawings of the naval bases at Trieste and elsewhere. He continued to live and work in Rome until his death, devoting much of his time to smaller paintings, seascapes and nature studies. He also produced a number of book illustrations, designs for frontispieces, and other graphic work, as well as several etchings and a handful of sculptures.