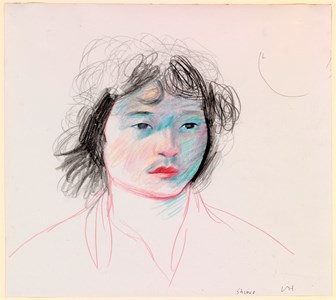 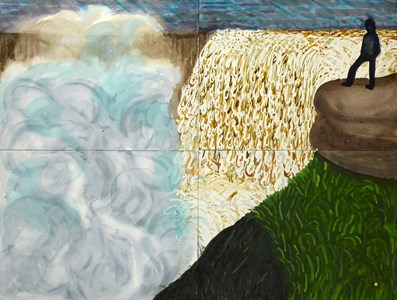 Although David Hockney made his first portraits and self-portraits as a teenager, it was not until the mid-1960’s that he began to seriously apply himself to portraiture, inspired by a new relationship with a young lover, Peter Schlesinger. Since that time, he has continued to produce portraits in the form of paintings, drawings, prints and photographs throughout his long and successful career. Portraiture has, indeed, been a central theme in much of his work. His sitters, with few exceptions, have been made up of friends, family, and lovers; people whom he knew well, and with whom he felt comfortable. As he himself has noted, ‘Naturally I’ve always liked drawing people, so one tends to draw one’s friends and the people one knows around you – anybody does…I think the way I draw, the more I know and react to people, the more interesting the drawings will be. I don’t really like struggling for a likeness. It seems a bit of a waste of effort, in a sense, just doing that. And you’d never know, anyway. If you don’t know the person, you don’t really know if you’ve got a likeness at all. You can’t really see everything in the face. I think it takes quite a lot of time.’ As a recent scholar has written, ‘the intensity of drawing meant that Hockney tended only to make portraits of friends who were sufficiently patient and understanding, and with whom he was sufficiently familiar to be able to capture the changes and variation in their appearance.’Hockney’s portraits have been executed in almost every medium in which he has worked, including oil paint and acrylic, pencil, pen and ink, charcoal, coloured crayons, pastel and, more recently, watercolour, as well as in the form of etchings, lithographs, Polaroid photographs and photographic collages. Whatever the medium or technique, however, Hockney’s portraiture is invariably characterized by the artist’s close observation of his subject. As Marco Livingstone has noted, ‘All of the artist’s portrait drawings were made in the presence of the sitter, for in Hockney’s view a portrait by definition has to be done from life or very soon after. This, however, by no means excludes the possibility of incorporating elements from memory, since previous knowledge of how someone behaves or looks can alter one’s apprehension of that person on a later occasion. Hockney is convinced that having recourse to information gathered from past experience, in conjunction with the evidence of the moment, has allowed him to make livelier and more animated faces than might otherwise have been possible.’