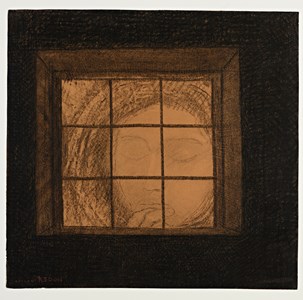 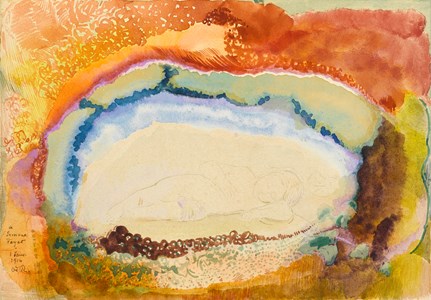 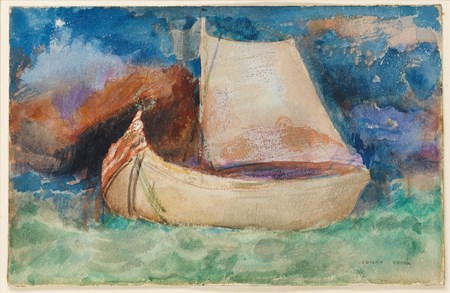 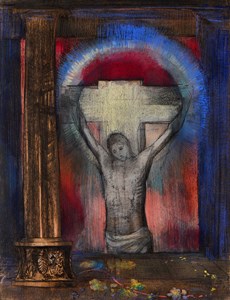 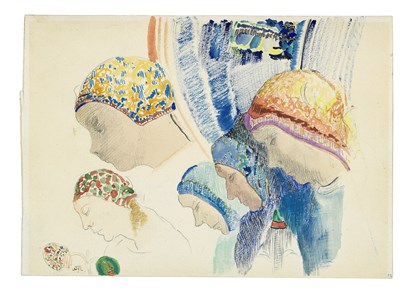 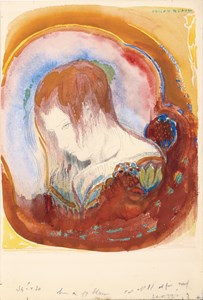 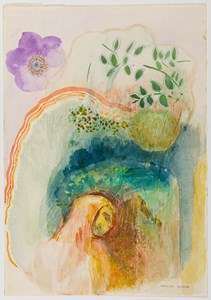 At a very young age, Odilon Redon was sent to live with an old uncle at Peyrelebade, a vineyard and estate surrounded by an abandoned park in a barren area of the Médoc region, northwest of Bordeaux. Here the young boy, who suffered from frail health and epilepsy, was to spend much of his childhood in relative solitude. Indeed, it was not until he was eleven that he was sent to school in Bordeaux, where at fifteen he began to take drawing classes. The most important influence on the young artist was Rodolphe Bresdin, whose studio in Bordeaux he frequented, and who was to prove decisive on his artistic development. It was from Bresdin, for example, that Redon learned the techniques of etching and lithography. Nevertheless, for most of his career Redon worked in something of an artistic vacuum, aware of the work of his contemporaries but generally preferring to follow his own path. His drawings and prints allowed him to express his lifelong penchant for imaginary subject matter, and were dominated by strange and unsettling images of fantastic creatures, disembodied heads and masks, solitary eyes, menacing spiders and other dreamlike forms. For much of the first thirty years of his career Redon worked almost exclusively in black, producing his ‘noirs’ in charcoal and chalk; the drawings he described as ‘mes ombres’, or ‘my shadows’.It was not until 1881, when he was more than forty years old, that Redon first mounted a small exhibition of his work, to almost complete indifference on the part of critics or the public. The following year, however, a second exhibition of drawings and lithographs brought him to the attention of a number of critics. Redon’s reputation began to grow, and in 1884 he exhibited at the first Salon des Indépendants, which he had helped to organize. Two years later he was invited to show at the eighth and final Impressionist exhibition, and in the same year exhibited with Les XX, a group of avant-garde artists, writers and musicians in Brussels. Towards the end of the 19th century Redon began to move away from working mainly in charcoal and black chalk in favour of a new emphasis on colour, chiefly using the medium of pastel but also watercolour, oil paint and distemper. Indeed, after about 1900 he seems to have almost completely abandoned working in black and white. Like his noirs, his pastels of floral still lives and portraits were popular with a few collectors, and several were included in exhibitions at Durand-Ruel in 1900, 1903 and 1906, and in subsequent exhibitions of his work in Paris and abroad. Despite this change in direction, however, Redon’s work remained unpopular with the public at large, and it was left to a few enlightened collectors to support the artist in his later years. Nevertheless, an entire room was devoted to Redon at the seminal Armory Show held in New York in 1913, an honour shared by Cezanne, Gauguin, Matisse and Van Gogh.