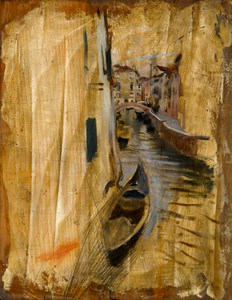 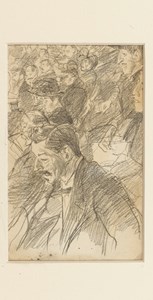 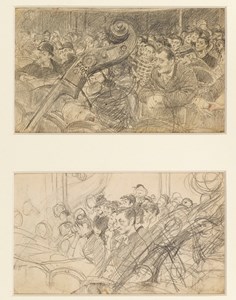 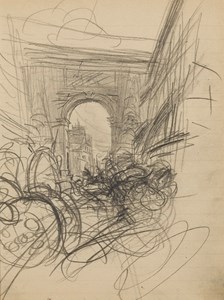 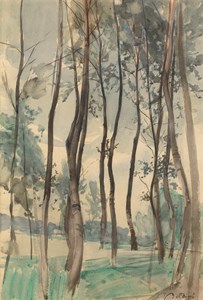 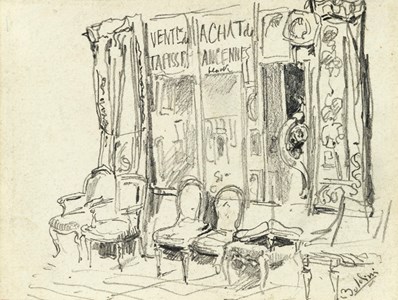 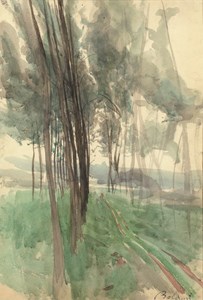 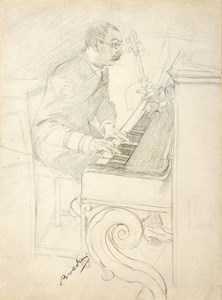 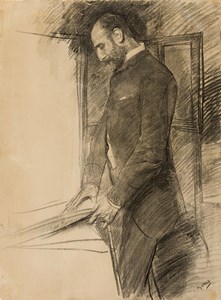 The son of a minor painter and restorer in Ferrara, Giovanni Boldini arrived in 1864 in Florence, where he enrolled in the Accademia di Belle Arti. He first exhibited his work in Florence in 1867, and in the same year visited the Exposition Universelle in Paris. From the earliest years of his career he displayed a remarkable talent as a portrait painter. During a trip to London in 1870 he obtained several portrait commissions, and by October 1871 he had settled in Paris, taking a studio on the Place Pigalle, and making his public debut at the Salon de Mars in 1874. Boldini’s bold, fluid style of painting was to prove immensely popular in Paris. In the late 1870’s and early 1880’s he produced genre paintings of elegantly dressed women portrayed in lavish interiors - subjects made popular by Alfred Stevens and James Tissot - and these works found a ready market in England and America through the efforts of the Parisian art dealer Adolphe Goupil. By the time he moved to a new studio in 1885, however, he had begun to paint society portraits, and soon developed a formidable reputation for his dazzling, elegant depictions of the fashionable women of Paris, painted with a virtuoso technique of bold, fluid brushstrokes. Within a few years Boldini had risen to a position of prominence in Parisian art circles. He befriended other society portrait painters such as Paul-César Helleu, John Singer Sargent and James A. McNeill Whistler, and became a close friend of Edgar Degas, who is said to have once told the artist, “Vous êtes un monstre de talent!”. By the turn of the century Boudin had become the most sought-after portrait painter in Paris, achieving such success that his reputation rivalled that of his friend Sargent in London. His fame reached as far as America, from where he received several portrait commissions, stimulated by an exhibition of his work held at Boussod, Valadon and Co. in New York in 1897. Boldini was a gifted and somewhat compulsive draughtsman, and filled many sketchbooks with drawings. (He would also use whatever paper came to hand, and there are examples of quick sketches drawn on menu covers, receipts, ledger paper, postcards, hotel stationery, pages torn from auction catalogues, and so forth.) His drawings, characterized by a restless energy and a spirited technique wholly in keeping with the bravura brushwork of his oil paintings, range from quick sketches of figures, landscapes, buildings and objects to more elaborate studies of these same motifs. As Richard Kendall has recently written, ‘Evident in almost all of [Boldini’s drawings] is a vivid engagement with the pleasures of looking and with the nervous exuberance of the drawing process, irrespective of the chosen subject…Some of these drawings would have taken only minutes or even seconds to complete, while others are the work of hours of concentrated labor…This engagement was vividly physical and sensuous, as his hand erupted in wild flourishes of pencil, pen and ink, crayon, and charcoal, or opted for extreme delicacy as the situation demanded.’ The largest surviving group of drawings by Boldini, bequeathed by the artist’s widow, is today in the collection of the Museo Boldini in Ferrara.