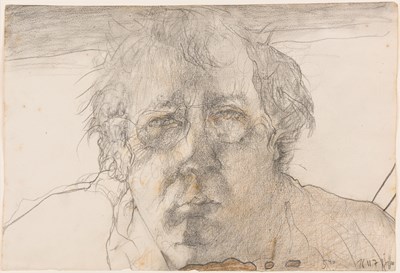 
Horst Janssen obsessively drew self-portraits throughout his career, often showing his distorted full face from unusual angles and often in extreme close-up. As has recently been noted, ‘Like Rembrandt, whom Janssen portrayed in watercolour and etching multiple times and whose self-portraits he intertwined in his own…, Janssen obviously examines himself in the mirror. He comes so close to it that the magnification is accompanied by a hyperreal exaggeration and distortion. The surface structure of the skin, its wrinkles and blemishes are precisely defined, nearly ugly, relentlessly real and, at the same time, completely unreal…Whereas viewers of a Janssen self-portrait are at first inclined to return the gaze of the artist, they soon notice that the images are not at all intended in this way. The close-up perspective seems perversely intimate – you are that close only to yourself.’

Drawn on the 16th of November 1971, the present sheet may be related to a similar self-portrait drawing of about the same date, today in a private collection in London, which is the artist’s design for the poster for an exhibition of his prints at the Galerie Kornfeld in Zurich in November 1971. Another closely comparable self-portrait drawing, dated 10 March 1972 and also depicting the artist’s then-lover Gesche Tietjens, is in a different private collection.

As Janssen himself wrote, in the introduction to the catalogue of an exhibition of his work in 1970, ‘Well – I was born, I played, I was filled with wisdom and now I sit here and draw; drawings for the market, drawings for presents, self portrait-drawings and drawings of every kind…I achieve the greatest effect however in the drawings of the third category – the self portraits. Partly because this discipline is hardly cultivated at all these days, partly because a comedian-like gift puts me in the position of being able to make my face appear quite convincingly, according to requirements, sometimes gay and young, sometimes melancholic, sometimes wild, and at other times bloated to the point of being destroyed, yet directly stimulating. My drawing ability in portraying the actual mirror image in a very exact manner, but with the very unusual yet important understatement, thus created the impression of that honesty so much desired by the public.’

The artist further described the process of making a self-portrait drawing: ‘So I sit down in the morning under the lamp when it is still dark and look across at myself for a moment: the right side of my face in reflection is shadowed. A light-hearted mischievousness does not make me see the most intense darkness a little to the right of the right extremity of the reflection of my face, where the most intense darkness actually is, but in the middle of the same to the right next to the nose, and the top and bottom lips running into the nick of the chin. The left eye strikes me as being quiet, soft and large because its gaze is not fixed on any one object. From this moment on I have to be careful not to destroy this completely ‘Nazarene’ expression, by not looking at my reflection too penetratingly or by not making it grin by remembering a joke. This can only happen as a form of recovery after the fixing of a momentary image. Once this has happened, the two of us can allow ourselves a coffee, a cigarette and a short chat to recover, which affords us considerable pleasure since we have the same needs and pleasures in everything. In the ensuing period the already determined concept is filled in quasi-automatically. From time to time I glance across at him seeking correction or merely confirmation and he glances back to me, showing a sympathetic understanding for my intentions. Thus this tender portrait comes to an end by itself, in this corresponding hour of the morning. I also put a crude signature underneath just of figures indicating the time – like a concluding farewell as an emphatic ending to a successful and clarifying discussion. And then a few seconds afterwards, when I am alone, I laugh out loud: Duped. And the day can begin.’

The present sheet once belonged to the artist’s close friend, the German historian, editor and critic Joachim Fest (1926-2006), who knew Janssen for over twenty-five years and assembled a large collection of his graphic work. Best known for his writings on the Nazi era, Fest also served as culture editor of the Frankfurter Allgemeine Zeitung between 1973 and 1993. Fest published two books on the artist; the first, Horst Janssen: Selbstbildnis von fremder Hand, appeared in 2001 and was followed five years later by Die schreckliche Lust des Auges: Erinnerungen an Horst Janssen, a memoir of their long friendship.