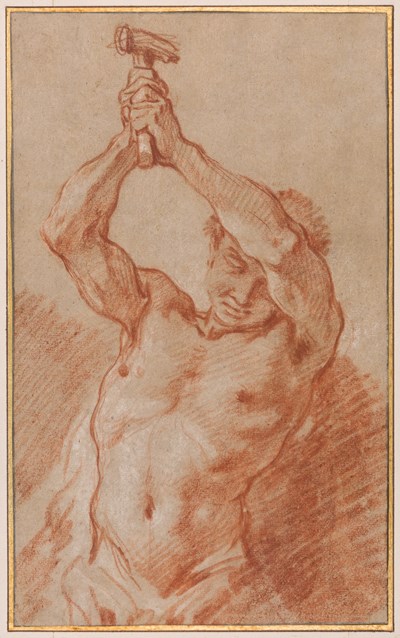 Study of a Male Nude Holding a Hammer Above his Head


As Margaret Morgan Grasselli has noted, ‘Probably because of his marked preference for women as models and subjects, Boucher made far fewer studies of male nudes. Not surprisingly, these are handled in a manner that reflects an entirely different attitude towards the models and underlines their very real physical dissimilarities from women. Instead of the long, smooth, sensuously curving contours that emphasize soft, seductive female forms, Boucher…uses sharper, more forceful strokes and handles the surfaces in a way that brings out the hard, muscular conformation of the male body. He also gives his male figures more physically powerful attitudes, sometimes making them almost burst from the page, completely unlike the graceful, often languorous and perfectly contained poses of his nymphs and goddesses.’ The majority of Boucher’s extant drawings of male nudes are academic studies of posed life models in red (or occasionally black) chalk, which he produced for students to copy, in his role as a professor at the Académie Royale from 1735 onwards. Several of these drawn académies were later engraved and published, most famously in the Livre d’Académies dessinés d’Après le naturel par François Boucher Peintre du Roy, published between c.1750 and 1754.

A number of drawings of male nudes by Boucher, however, were not done as teaching exercises but as preparatory studies for paintings. As Alastair Laing has noted of this drawing, ‘[It] is a genuine study for a painting, rather than a derivative from a painting, done for collectors.’ The drawing may be related to an important painting by the artist; the Venus at the Forge of Vulcan, dated 1747, in the Louvre. A monochrome oil sketch for the composition is in the Louvre, while a drawing for a different forger in the painting, executed in black chalk, is in the Musée Sainte-Croix in Poitiers. A study for the Cupid with arrows and a dove may have been made after the figure in the painting, as a drawing for a collector, rather than as a preparatory study for it. No other preparatory drawings related to the painting of Venus at the Forge of Vulcan are known.

The standing figure in the present sheet was later reused in a more ambitious composition of the subject of Venus at the Forge of Vulcan, designed by Boucher for a tapestry woven at Beauvais between 1754 and 1756, for which a grisaille sketch is in the Louvre.

To judge by his distinctively rugged appearance, the model for both of these drawings seems to be Jean-François Deschamps, a popular model at the Académie whom Boucher favoured for drawings and paintings of the male nude from around 1740 onwards. Boucher’s contemporary, the writer Claude-Henri Watelet, in his posthumously published Dictionnaire des beaux-arts, noted that ‘sometimes Deschamps was the ever-youthful Mercury, sometimes the terrible Mars, sometimes Neptune, Pluto, Jupiter…There was nothing about him, including his head, that could not sometimes be recognised, and one was astonished to see his somewhat Bacchic face become that of a hero or a God.’ Among stylistically comparable red chalk drawings of male nudes by Boucher, also posed by Deschamps, are two studies in a Swiss private collection.

Study of a Male Nude Holding a Hammer Above his Head