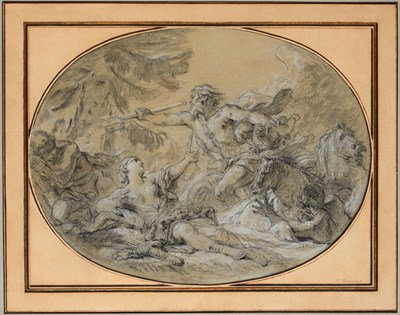 
This drawing is closely related to a painting by Boucher of Neptune Rescuing Amymone, signed and dated 1764 and today in the collection of the Château of Versailles. The Versailles painting was one of a set of four large oval canvases painted by Boucher in 1763 and 1764, as models for tapestries. Two upright oval paintings – one depicting Aurora and Cephalus, signed and dated 1763, and the other Vertumnus and Pomona, dated the following year - are today in the Louvre, while a pair of transverse or horizontal oval compositions – of Venus at the Forge of Vulcan and Neptune Rescuing Amymone, the latter dated 1764 – are at Versailles, on deposit from the Mobilier National.

These four paintings by Boucher were in turn used for the central medallions of a set of tapestries ordered in 1763 from the Gobelins manufactory by George William, 6th Earl of Coventry, for a room in his country seat at Croome Court in Worcestershire, which was in the process of being remodelled by the architect Robert Adam. Commissioned by the Earl of Coventry from the master weaver Jacques Neilson, the head of the Gobelins workshop, these tapestries depicted simulated paintings of subjects from Ovid’s Metamorphoseshung upon imitation crimson damask grounds. The tapestries, symbolizing the four Elements, comprised two upright ovals of Aurora and Cephalus and Vertumnus and Pomona, representing allegories of Air and Earth, respectively, and a pair of transverse or horizontal ovals depicting Venus Visiting Vulcan (Fire) and Neptune Rescuing Amymone (Water). Boucher’s oval compositions were inserted into the tapestry designs as central medallions with fictive frames, to which were added elaborate decorative borders (alentours) designed by Maurice Jacques. As Alastair Laing has pointed out, ‘[Boucher’s] oval compositions, both upright and transverse, were only commissioned once the end of the Seven Years war, and the visit [to Paris] of the 6th Earl of Coventry, enabled Jacques Neilson, using Boucher and Maurice Jacques, to put into effect his plans for a set of tapestries with simulated framed paintings on simulated damask grounds with ornamental borders, that he had been proposing since 1758.’ Woven between 1764 and 1771 for Croome Court, this first set of the so-called Tentures de Boucher, today adorns a room from that house in the Metropolitan Museum of Art in New York.

Boucher kept a studio at the Gobelins tapestry factory from 1749, and between 1755 and 1765 served as surinspecteurat the manufactory. He produced a number of paintings to be copied as tapestries at the Gobelins, the most significant of which to survive are the Tentures de Boucher. As Laing has noted, ‘Right up to the end of his life Boucher was producing paintings – not always of mythological subjects – for successive sets of the Tentures de Boucher, almost all of which were commissioned by grand foreign – and particularly English – clients; and this was continued after his death, based upon paintings that he had left behind. They were amongst the most successful sets of tapestries ever woven at the Gobelins.’ Related to the central medallion of the tapestry of Neptune Rescuing Amymone, the present sheet, which may be dated to 1764, depicts the sea god Neptune, armed with his trident, leaping from his horse-drawn chariot to save Amymone from the ravages of a satyr.

Boucher had earlier treated the theme of Neptune and Amymone in a tapestry design for the Beauvais manufactory of 175010, although this was different in composition to the present sheet and the version of the subject in the Tentures de Boucher. The painting which served as the model for the 1750 tapestry is lost, although a preparatory drawing by Boucher, with considerable differences from the tapestry, is in the Louvre.