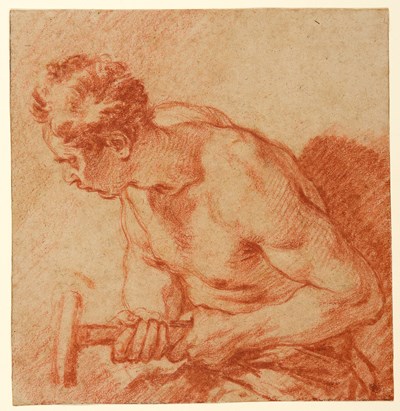 Study of a Male Nude Holding a Hammer


This is a preparatory study, in reverse, for a figure of a blacksmith in the left background of Boucher’s oval painting of Venus at the Forge of Vulcan in the Louvre, dated 1747 and exhibited at the Salon of that year. The painting is noted in a mémoire by Boucher as having been commissioned, for the sum of 800 livres, by Charles François Paul Le Normant de Tournehem, Directeur général des bâtiments du roi, for the King’s bedchamber at the Château de Marly.

It has been suggested, however, that the Venus at the Forge of Vulcan and a pendant painting of Venus Presenting Aeneas to the Gods (or The Apotheosis of Aeneas), now in the Musée-Promenade de Marly-le-Roi in Louveciennes, may have initially been commissioned in 1746 for the redecorated apartments of the soon to be married Dauphin at Versailles, before the intended destination of the works was changed to Marly. The painting of Venus at the Forge of Vulcan is described in the mémoire as ‘4 pieds de long sur 3 et demi de haute représente Vénus qui prie Vulcain de forger des arms pour Enée; ce tableau est compose de huit figures’, and in the 1747 Salon livret as ‘Un Tableau ovale, representant les Forges de Vulcain. Ce tableau est destine pour la Chambre à coucher du Roy à Marly’. Boucher received the final payment for both works in February 1748. Not long thereafter the composition was adapted and enlarged by the artist in a design for a tapestry to be woven at the Beauvais tapestry works.

Boucher presumably drew the present sheet before he had determined the definitive composition of the painting. Although the figure is reversed in the final painting, and the artist may therefore have used a counterproof of this drawing to reorient the figure, the position of the hands in the drawing is close to that of the right-hand forger in the painting. The present sheet may also have been used for a similar figure in the Beauvais tapestry noted above.

Boucher was particularly fond of the subject of Venus at the Forge of Vulcan, and treated it several times in his career, in paintings, drawings and tapestry cartoons. Taken from Virgil’s epic Aeneid, the theme of the goddess visiting Vulcan’s forge on Mount Etna to ask her estranged husband to provide arms for her illegitimate mortal son Aeneas, to which he agrees only after her seduction of him, had great appeal for the artist, and undoubtedly for his patrons as well. As Edith Standen has noted of the theme, ‘One can only speculate why this particular mythological subject was so popular with Boucher’s patrons, including Louis XV. Perhaps the reason was that it provided such a piquant contrast between the soft whiteness of Venus, with her nymphs, cupids, and doves, and the masculinity of Vulcan and his fierce helpers at their noisy and dirty labors. Boucher, in fact, has been quoted as recommending the subject to a pupil whose noble patron had asked for a painting. He said it was “une tâche fort attrayante à remplir: le dessin d’une belle figure de femme environnée d’Amours, la silhouette d’un homme musculeux accompagnée de quelques cyclopes à l’arrière-plan.”’

As Françoise Joulie has noted of such drawings as these by Boucher, intended not as academies but as studies for paintings, ‘They are perhaps some of the maître’s finest drawings, because his knowledge and mastery of anatomical drawing were internalized to give precedence to studies of posture in a composition.’

Study of a Male Nude Holding a Hammer