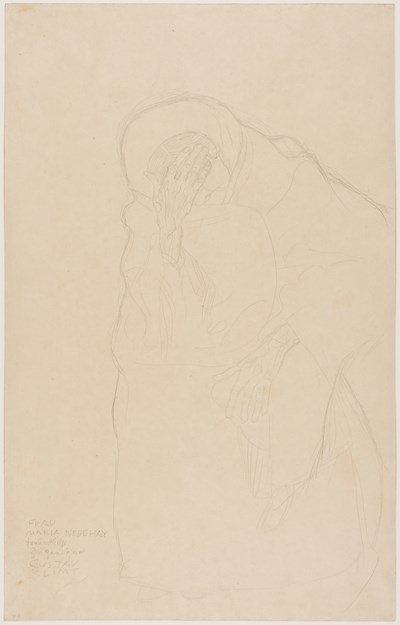 
In her catalogue raisonné of Gustav Klimt’s drawings, Alice Strobl identified this drawing as a preparatory study for the artist’s relatively little-known painting Old Woman (Alte Frau) of 1909, once owned by the American architect Frank Lloyd Wright and the German physician, collector and philanthropist Gustav Rau, and today in a private collection. This dark and somewhat sombre painting was first exhibited at the Internationale Kunstschau in Vienna in 1909 and also at the ninth Venice Biennale the following year, in a room devoted to works by Klimt.

Old Woman (Alte Frau) is part of a small group of paintings with black backgrounds that Klimt produced between 1907 and 1910, in which the features of the subject appear dramatically from their shadowy surroundings. The work is unusual in that the artist rarely chose old people as the subject for his paintings, with the exception of a handful of portraits. As has been noted of the painting, ‘As a figure on its own, she stands for old age itself and is to be understood allegorically. Her bowed head and closed eyes convey the calm and self-absorption of the figure. Her face, marked by the years, suggests a quiet fatalistic melancholy…The isolation of the figure and its dissociation from life mark the despairing loneliness of old age.’ In its almost Expressionistic mood and effect, Old Woman (Alte Frau) can be related to a handful of other works by Klimt of the same period such as Mother and Children (The Family) of 1909-1910 in the Belvedere in Vienna.

While the painting Old Woman (Alte Frau) displays a measured pathos, it lacks the sheer intensity of expression and gesture found in the present sheet – which is the only generally accepted study for the picture - in which the woman’s face is hidden by a bony hand and her body seemingly bent over in pain. Alice Strobl has noted that at the same time that Klimt made this drawing he was also working on the initial studies for his monumental painting Death and Life, today in the Leopold Museum in Vienna, which appears to have been begun around 1908 but was not finished until two or three years later. During this period the artist produced several studies of elderly women, in rapid graphite or chalk sketches, some confronting the viewer and others shrivelled and giving in to their physical decline.

This large sheet was drawn not long after the young Egon Schiele first came into contact with Klimt, who was known to have often been a mentor to younger artists. The two artists met in 1907, when Schiele was seventeen and Klimt was almost thirty years older and the acknowledged leader of the Vienna Secession group. Klimt took an interest in the young Schiele, encouraging him in his work and buying his drawings or exchanging them for his own, as well as finding him models and introducing him to potential collectors. While the strong stylistic influence of Klimt’s draughtsmanship is readily evident in Schiele’s earliest drawings of between 1907 and 1909, the present sheet offers a tantalizing glimpse of the younger artist’s impact on the older one; in the posture of the figure and, in particular, the expressive emphasis on the hands and fingers of the subject.

This sheet was one of around thirty drawings by Klimt acquired from the artist in 1917 by the Viennese art dealer Gustav Nebehay (1881-1935). Nebehay first met Klimt in the early summer of 1917, not long after he and his wife Maria (née Sonntag) had settled in Vienna and opened a new gallery there. Nebehay kept three of the drawings – including the present sheet – for his own collection, and in a letter of 12 October 1917, the day after a visit by Klimt to the dealer’s home, asked the artist to dedicate these three drawings to himself and his wife Maria:
‘Dear Professor! Herewith you will find the drawings returned. On the sheets that I and my wife have chosen for ourselves, I ask you to write [to] ‘Herrn Gustav’ or ‘Frau Maria N.’ so that the drawings can be withdrawn from the trade…I hope that yesterday evening was good for you and remain, with kind regards, yours, Gustav Nebehay.’

Three months after this letter was written, Klimt suffered a severe stroke, and died on 6 February. The present sheet may therefore have been among the last drawings to be signed and dedicated by the artist. Gustav Nebehay, who kept this drawing throughout his life, assisted in the settlement of Klimt’s estate (as he also did for Schiele, who died eight months after Klimt) and came to establish his career dealing in works by both artists. This drawing was later inherited by Gustav and Maria Nebehay’s son, Christian Nebehay (1909-2003), who was likewise an art dealer and published numerous important scholarly books on Klimt and Schiele. The younger Nebehay included the present sheet – albeit not for sale – in an exhibition of Klimt drawings at his Vienna gallery in 1960. Although Christian Nebehay also lent this drawing to an important exhibition of drawings by Klimt and Schiele held at the Albertina in Vienna in 1968, it has not been exhibited since.