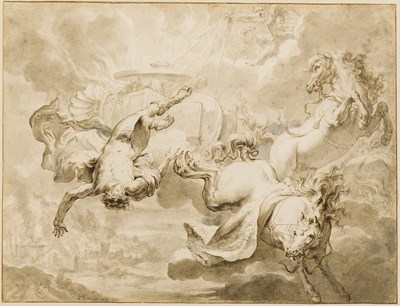 The Fall of Phaeton


One of a series of eighty-three elaborate pen and wash drawings by Godfried Maes illustrating various episodes from Ovid’s Metamorphoses. Perhaps intended as book illustrations or designs for prints, these highly refined drawings were, however, never reproduced or published in Maes's lifetime. In 1717 the artist’s widow sold all the drawings to the artist Jacob de Wit, who later used some of them as models for his own designs for illustrations, engraved under the supervision of Bernard Picart, for a 1732 translation of The Metamorphoses into Dutch, French and English editions. The original drawings by Maes remained together until 1762, when they were dispersed at auction in Amsterdam.

Here, in the third of four drawings depicting the story of Phaeton, the fiery chariot of the Sun plunges to Earth, scorching the ground, drying up the seas and rivers, burning the mountains and turning much of Africa into a desert. ‘Then, truly, Phaethon sees the whole earth on fire. He cannot bear the violent heat, and he breathes the air as if from a deep furnace. He feels his chariot glowing white. He can no longer stand the ash and sparks flung out, and is enveloped in dense, hot smoke. He does not know where he is, or where he is going, swept along by the will of the winged horses.’

As her surface burns, Earth, in her agony, cries out to Jupiter, who is forced to intervene: ‘the all-powerful father of the gods climbs to the highest summit of heaven, from where he spreads his clouds over the wide earth, from where he moves the thunder and hurls his quivering lightning bolts, calling on the gods, especially on him who had handed over the sun chariot, to witness that, unless he himself helps, the whole world will be overtaken by a ruinous fate…He thundered, and balancing a lightning bolt in his right hand threw it from eye-level at the charioteer, removing him, at the same moment, from the chariot and from life, extinguishing fire with fierce fire. Thrown into confusion the horses, lurching in different directions, wrench their necks from the yoke and throw off the broken harness. Here the reins lie, there the axle torn from the pole, there the spokes of shattered wheels, and the fragments of the wrecked chariot are flung far and wide. But Phaethon, flames ravaging his glowing hair, is hurled headlong, leaving a long trail in the air, as sometimes a star does in the clear sky, appearing to fall although it does not fall. Far from his own country, in a distant part of the world, the river god Eridanus takes him from the air, and bathes his smoke-blackened face. There the Italian nymphs consign his body, still smoking from that triple-forked flame, to the earth, and they also carve a verse in the rock: HERE PHAETHON LIES WHO THE SUN’S JOURNEY MADE, DARED ALL THOUGH HE BY WEAKNESS WAS BETRAYED.’

The Fall of Phaeton