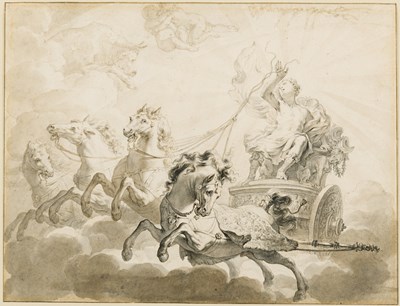 Phaeton in the Chariot of the Sun God


Godfried Maes produced drawings both as preparatory studies for paintings and as finished, independent works. Arguably the most significant example of the latter are a series of eighty-three elaborate pen and wash drawings illustrating various episodes from Ovid’s Metamorphoses, of which the present sheet is one. Perhaps intended as book illustrations or designs for prints, these highly refined drawings were, however, never reproduced or published in his lifetime. In 1717 the artist’s widow sold all the drawings to the artist Jacob de Wit, who later used some of them as models for his own designs for illustrations, engraved under the supervision of Bernard Picart, for a 1732 translation of The Metamorphoses into Dutch, French and English editions.

This, the second drawing from the series, depicts Phaeton on the chariot of the Sun. The horses, feeling the chariot lighter than usual, go out of control, and the frightened youth drops the reins:

‘the team of four run wild and leave the beaten track, no longer running in their pre-ordained course. He was terrified, unable to handle the reins entrusted to him, not knowing where the track was, nor, if he had known, how to control the team… When the unlucky Phaethon looked down from the heights of the sky at the earth far, far below he grew pale and his knees quaked with sudden fear, and his eyes were robbed of shadow by the excess light. Now he would rather he had never touched his father’s horses, and regrets knowing his true parentage and possessing what he asked for…robbed of his wits by chilling horror, he dropped the reins. When the horses feel the reins lying across their backs, after he has thrown them down, they veer off course and run unchecked through unknown regions of the air. Wherever their momentum takes them there they run, lawlessly, striking against the fixed stars in deep space and hurrying the chariot along remote tracks. Now they climb to the heights of heaven, now rush headlong down its precipitous slope, sweeping a course nearer to the earth.’

Phaeton in the Chariot of the Sun God